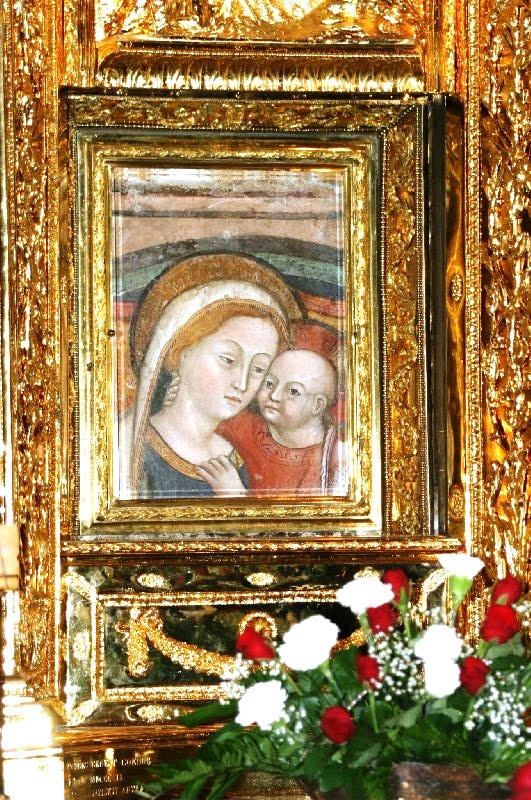 Pope Pius XII composed the below powerful prayer, in honour of Our Lady of Good Counsel:

Holy Virgin, moved by the painful uncertainty we experience in seeking and acquiring the true and the good, we cast ourselves at thy feet and invoke thee under the sweet title of Mother of Good Counsel. We beseech thee: come to our aid at this moment in our worldly sojourn when the double darkness of error and of evil plot our ruin by leading minds and hearts astray.
Seat of Wisdom and Star of the Sea, enlighten the victims of doubt and of error so that they may not be seduced by evil masquerading as good; strengthen them against the hostile and corrupting forces of passion and of sin.
Mother of Good Counsel, obtain for us our most urgent need….. (here mention your request) and secure for us from thy Divine Son the love of virtue and the strength to choose, in doubtful and difficult situations, the course agreeable to our salvation.
Supported by thy hand we shall thus journey without harm along the paths taught us by the word and example of Jesus our Savior, following the Sun of Truth and Justice in freedom and safety across the battlefield of life under the guidance of thy maternal Star, until we come at length to the harbor of salvation to enjoy with thee unalloyed and everlasting peace. Amen.

Today, Easter Sunday, we start with a series aimed to show what went wrong in the traditional Catholic movement in Malta. Ten years ago there was much hope when a group in favour of the traditional liturgy in Malta was created. The results have however been very limited.

We will see what type of divisions there were, the situation under Archbishop Cremona, Bishop Grech and Archbishop Scicluna. We will then see the current situation and finally what the outlook for the traditional Catholic movement in Malta is.

Pro Tridentina (Malta) was officially founded in August 2007, less than a month after the promulgation of the motu proprio Summorum Pontificum. Prior to this event, there was no lay movement in favour of the Tridentine Mass in Malta or Gozo.

The developments that led to the founding can be traced back to November 2006. At the time, the FSSP, contacted a number of Maltese aiming to develop something concretely in this country.

A first informal meeting was held on 21 April 2007 to determine the way forward. This was followed by another informal one on 20 July 2007 i.e. a week after the publication of Summorum Pontificum. Pro Tridentina (Malta) was accepted as a member of the FIUV in 2009. Its first President was elected to the FIUV Council in 2009 and served until 2015.

Since then, the Tridentine Mass became, albeit slowly, a reality in Malta. On the other hand, attempts in Gozo were met by obstacles by Bishop Grech, in defiance of Pope Benedict XVI.

Still, the Catholic Church in Malta is not favourably inclined to a wider, regular celebration of the Extraordinary Form. The media also presents a different picture than the reality is, namely that young people in Malta are among the most fervent followers of this form of the Mass. However, Tridentine Masses are known to have been held in Valletta, Cospicua, Birkirkara and other towns around the island.

In today's interview on Malta Today, Fr Mark Montebello, referring to the situation in the Catholic Church said:
"No, I don’t think we’re anywhere close to a schism. What I think is at present causing some turmoil is the changed official political standpoint of the papacy. From a far-right stance taken by the anti-Communist John Paul II and the anti-liberalist Benedict XVI over more than three decades, now, with Pope Francis, we have had four years of a third-positionist Peronista who seeks to mediate tensions caused by conflicting extreme poles."

We beg to differ. A schism, albeit a minor one, has already occurred in the Church in Malta. And once schisms appear they are hard to conceal.They lead to the division of a group into opposing factions. We will see in another post how this has taken place in Malta.
on April 16, 2017 No comments: