Count Neri Capponi, a prominent Florentine legal scholar and canonist, and one of the great traditional Catholic personalities, died on 13 December 2018 in Florence, Italy. Count Capponi taught for many decades at the University of Florence. He also served on the marriage tribunal of the Archdiocese of the same city and was recognized as a canon lawyer with the credentials to speak before the Roman Rota. Neri Capponi was also a Vice-President of the FIUV and was also Honorary President of the same Federation for many years. He also corresponded with the former President of Pro Tridentina (Malta).
Capponi was known for having defended the right of Archbishop Marcel Lefebvre to continue his apostolate without being labelled schismatic.

“You cannot apply the standards of the new code of canon law and the mentality of the old code. According to the new code, Lefebvre could do what he did with a Catholic intention, and he did what he did in ‘sincerity’ and invoked the ‘state of emergency’ argument, which the new code permits. You might not like the new code, but it’s what governs the Church.”

Neri Capponi was also very much in favour of Summorum Pontificum. He considered the post-Vatican II period as a time of crisis:

"When asked why I believe the crisis we now face is worse than Arianism, I give these reasons: (a) The principal vehicle of the faith, the liturgy, was untouched by the Arian crisis; (b) whereas the Arian crisis was precipitated and sustained by the intervention of secular power, the post Vatican II crisis comes from within the Church and is therefore more difficult to fight; (c) in the fourth century, Pope Liberius finally signed the excommunication of St. Athanasius under duress—in the twentieth century Pope Paul VI was admittedly taken in and hoodwinked by his misguided optimism, but there was no duress; (d) the present crisis is not only one of faith but of morals as well. In addition, today not only one dogma, albeit a very important one, is denied as with Arianism, but all dogmas, be it even the existence of a personal God!" Times of Crisis, Times for Faith, lecture delivered in 1995. 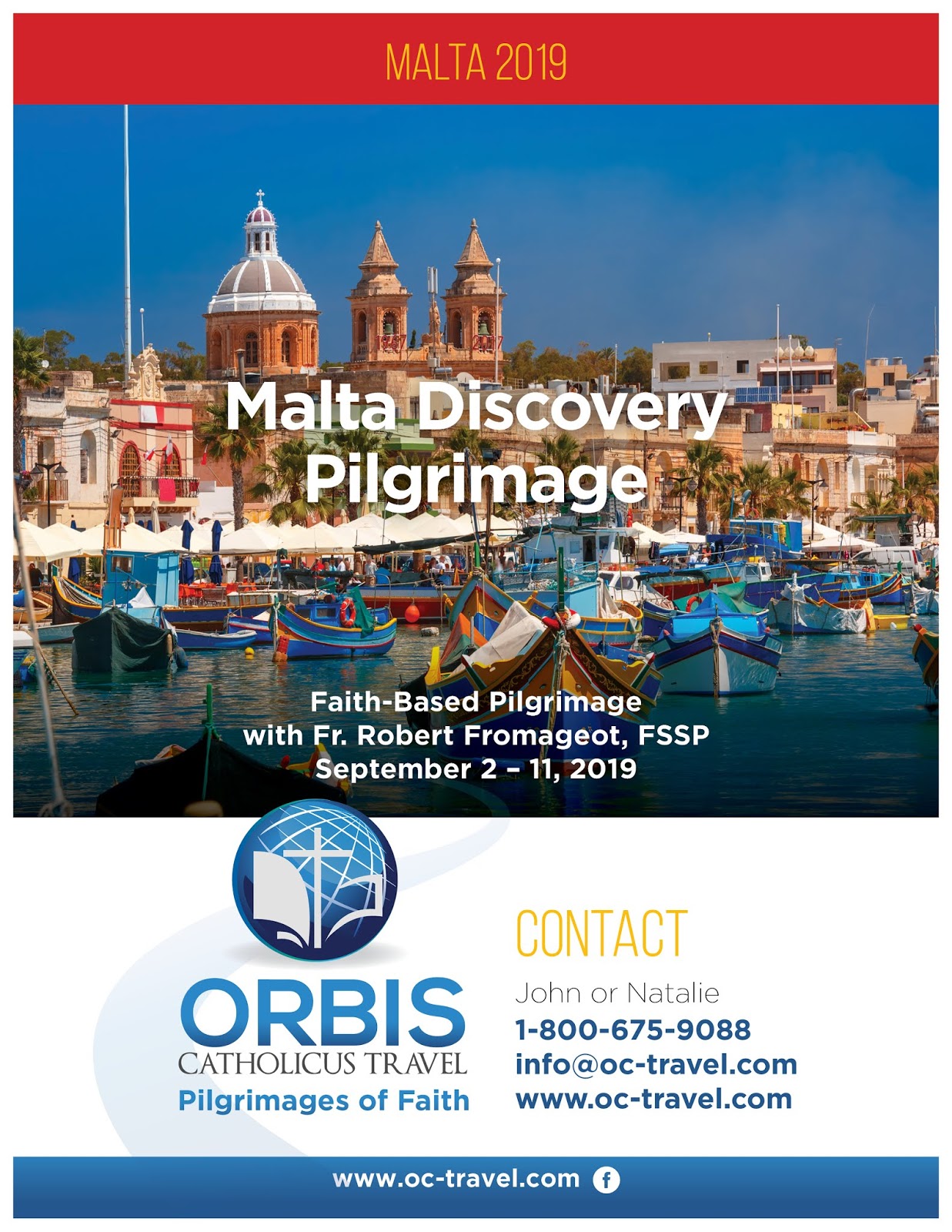 Pro Tridentina (Malta) looks forward to co-operate in this laudable initiative.
DAY 1 – Monday, September 2, 2019: Depart North America
Depart on overnight flight to Europe, connecting to Malta.  Please note: flights are additional cost.  (Meals on flights).
DAY 2 – Tuesday, September 3, 2019: Birkirkara
Arrival in Malta – Transfer to hotel and enjoy the afternoon relaxing by the pool in the Mediterranean sun or an optional bus tour which brings you straight to the heart of Malta, through a visit to one of our villages, boasting an imposing baroque basilica, followed by a welcome Mass together experiencing life in a local parish. Welcome dinner in a historic 17th century palazzo followed by a casual evening stroll through the old medieval capital city of Malta, Mdina, known as the Silent city, beautifully illuminated at night time.  Included: D
DAY 3 – Wednesday, September 4, 2019: Mdina, Rabat
We start our day in Mdina with Mass at the lovely Carmelite Church, followed by a visit to the baroque cathedral of Saint Paul. Having also visited the Diocesan Museum, we will pass to the adjacent archives of the Metropolitan Chapter, for an exclusive visit that will allow us to see the records of the intriguing Roman Inquisition in Malta. After lunch in an outdoor terrazza overlooking the bastions, we will walk through Mdina and Rabat’s winding streets, making a special visit to Saint Paul’s Grotto, the birthplace of Christianity in Malta, together with the Wignacourt Museum, named after the Grand Master who founded the conventual chaplains who originally cared for this place.  Next we visit Saint Paul’s catacombs, the largest catacomb complex in Malta. Leaving Rabat, we will transfer to Malta’s exceptional wine country to visit a winery estate for tasting local wines. Following dinner, an optional relaxing walk through Valletta, the city built by the Knights.  Included: B, D
DAY 4 – Thursday, September 5, 2019: Paola, Birgu
Our day will start with Mass in Paola, which bears the name of the Grand Master who founded it, in a church dedicated to one of the greatest saints of the Order of Malta. After Mass, we will move to the Grand Harbor area to enjoy the sea breeze.  We will visit the Three Cities, specifically Vittoriosa, the city which withstood victorious the onslaught of the Ottomans during the Great Siege of 1565. We start our visit, as is due, at the Collegiate church of Saint Lawrence, the original conventual church of the Order in Malta. In an adjacent oratory, we will venerate a medieval icon brought over from Rhodes, and we will see the sword and cap used by Grand Master La Vallette during the Great Siege. Following lunch at the Vittoriosa waterfront, we will visit Castel Sant’Angelo, originally the medieval Castrum Maris, and now the Maltese seat of the Order in Malta. This fortification allows for breath-taking views of the surrounding Grand Harbor. We end the tour in Vittoriosa, or Birgu, as it is locally known, by a visit to the Inquisitor’s Palace, unique among such palaces in Europe, for having withstood not only the ravages of time, but also spared from destruction by the Napoleonic forces. Following dinner, we end our night with a relaxing walk through Saint Julian’s and a drink by the sea. Included: B, D
DAY 5 – Friday, September 6, 2019: VallettaWe will start our day in one of Valletta’s oldest churches, Saint Augustine’s, followed by a short walk to the Monastery Church of Saint Ursula, home to a female branch of the Order of Malta. Here will venerate the relic of the head of Blessed Gerard, the founder of the Knights of Malta. From there we move to the Order’s Conventual Church, now Saint John’s Co-Cathedral. Hidden behind its austere facade, lies Malta’s most precious architectural gem, from the ornate marble tombstones of the Knights, hailed as being the most beautiful floor in Europe, to the rich vault decorated by the Knight-Artist, Mattia Preti.  At the adjacent museum, we will see Malta’s two very rare Caravaggio paintings, the Beheading of the Baptist, the only one to bear his signature, as well as his Saint Jerome.  After lunch, we will be able to visit the National Library, which holds the Order’s archives, followed by a tour of a 16th century palace, still home to a Maltese noble family. The Knight Don Pietro La Rocca built the palace. We will end our evening with a traditional dinner, where one can taste a selection of local cuisine.  Included: B, D
DAY 6 – Saturday, September 7, 2019: Gozo, Rabat
We move today to Gozo – the island of Calypso, mentioned in Homer’s Odyssey. Enjoy the boat ride, passing the picturesque St Paul’s Bay and the magnificent view of Saint Paul’s Islands, traditionally held to be the place of Paul’s shipwreck. After a short trip across the channel, we will start our day in Gozo by Mass at the famous Ta’ Pinu Basilica, Malta’s most venerated Marian shrine.  Saint John Paul II came here as a pilgrim during his pastoral visit to the Maltese islands in 1990. Mass will be followed by a walk through Gozo’s imposing Cittadella, a fortified city, as well as a visit to the nearby Saint George’s Basilica. A walk through Victoria, named in honor of the Empress, Queen Victoria, on the occasion of her Golden Jubilee, will allow us to see the famous lace-making craft in Gozo. Following a relaxing lunch in one of the most beautiful bays of the island, we will continue for the afternoon to Xagħra. Here will visit Ġgantija, a prehistoric complex which is said to be about 5,500 years old, making it the world’s second oldest standing religious structure. Xagħra will be celebrating its feast day, which will allow us to end the day by attending Solemn Vespers at the local basilica dedicated to the Nativity of the Virgin.  Included: B

DAY 7 – Sunday, September 8, 2019: Valletta Celebration Our Lady of Victories, SengleaWe will start this special day when Malta celebrates its annual il-Vitorja, the celebration of the victory over the Turks in 1565, with Mass at the Chapel of Fort Saint Elmo, a place made sacred by the blood of the martyrs of the Great Siege of 1565. This will be followed by time to visit this fort as well as the interesting War Museum. We will then walk up the hill to visit the Grand Master’s Palace and Armory. Following lunch, we will transfer for a relaxing afternoon at Malta’s most beautiful beach. We will end our day by immersing ourselves into a local festa street celebration in honor of the Nativity of the Blessed Virgin Mary, at Senglea, which bears the name of the Grand Master who built it.  Included: B
Day 8 – Monday, September 9, 2018: Marsaxlokk, Birkirkara
A relaxing Sunday morning, enjoying Malta’s coastline and the beauty of the Mediterranean Sea.  Visit a traditional fishing village in a rural area on a sleepy Sunday morning.  Experience life on the sea as you catch a rare glimpse of the locals, fisherman for centuries, amid palms, sun and surf.  Boat ride to the Blue Grotto.  Lunch on the seashore.  Visit St. Peter’s Pool, an enchanting bay on the sea with natural rock formations.  Sung Mass at St. Paul’s church in Birkirkara, home of the Extraordinary Form of the Roman Rite in Malta.  Included: B, D
Day 9 – Tuesday, September 10, 2019: Free Day
Free day for exploration, shopping, rest or leisure.  Morning Mass at St. Juliana’s old parish church.  Enjoy an afternoon at the hotel pool.  Or re-visit some favorite sites.  Final farewell dinner.  Included: B, D
Day 10 – Wednesday, September 11, 2019: Depart Malta
Return flights home to North America.  Included: B
N.B. Itinerary is tentative and subject to change.
on December 14, 2018 No comments:

Confraternity for the Tridentine Mass in Malta?

To add to our joy for the Christmas season,  Pro Tridentina (Malta) is announcing that it is studying the possibility of forming a Confraternity of the laity and priests involved in the traditional Latin Mass.

What will be the function and purpose of the Confraternity? It will enable and support priests who wish to offer the Tridentine Mass, it will provide a formal structure of financial, spiritual and organisational aid with the aim of establishing a network of places where the Mass will be offered.

This will be in line with the wish of Pope Benedict XVI when he expressed a desire to see more priests crossing parish boundaries to share their vocation in a broader sense and to draw strength from working not in isolation but together.
Anyone interested to be part of this project, please drop an email to pro.tridentina.malta@gmail.com if you can help in any way.
on December 14, 2018 No comments: