For those who perhaps might now know what the Tridentine mass is; this is basically the mass that used to be celebrated prior to the Second Vatican Council meaning a mass in Latin with the priest giving the people his back as can be seen from the picture with this blog and with certain different prayers including a prayer during the time of Lent praying for the conversion of Jews, something deemed most offensive by the Jewish community and rightfully so.

Obviously its a free world and those who believe that the Tridentine Mass should return are free to argue so and that much I have no qualms about; more so when some within that category happen to be friends of mine. It is however in my view an outdated, andequated argument which clearly fails to understand modern times.

The church cannot fossilize itself; indeed the Roman Catholic Church is already plagued by a mentality of fossilization and a lack of catching up with the times. To revert to Latin is merely to increase the severity of the situation. Mass should be a spiritual expience where one feels closer to God and not merely a trip down traditions lane. One can only feel close to God if one is understand what is being said!

Imagine if someone read out the works of Shakespeare in Chinese; would you appreciate the beauty of Shakespeare's stories? Most certainly not!

Some might argue that Pope Benedict XVI merely made it possible for the Tridentine Mass to be held and by no means turned it into obligatory. All too true, but it is nonetheless a regression; a regression which certainly caused Pope John XXIII to turn in his grave!!

Let us not become the Christian version of Iran! Iran under the Shah had all the modern commodities of western life and indeed had a western culture. It was the ascension to power of the Ayatollah Khomeini that Iran reverted back to the strictly Muslim society it is today. Let us not be the Church which opened up in the 60's and went back in the 2000's.

The days of the Tridentine Mass are over; it is a tradition best kept in the history books and nowhere else! Its an element which would only serve to weaken the Catholic community and not strenghten.

Godwin Xuereb, Pro Tridentina (Malta) President's comment: The above article dated 16 August 2009 shows that a number of 'Catholics' have little, if any, appreciation of the Extraordinary Form of the Roman Rite. Worse still, they have no idea of what this Rite is all about!! Mr Angelo Micallef also refused any comments on his Blog for a fair representation of the arguments.

There's something "new" and exciting on the (Roman Rite) Catholic Philadelphia landscape, and that's the return of the Traditional Latin Mass (TLM).

After 40 years of buried obscurity, the traditional rite or the so-called Mass of the Ages (Pope Urban VII in 1634 said that the Roman Mass was the envy of souls in Heaven) is being made more available in parishes throughout the Archdiocese. Although there have been random TLM's at various parishes in and outside the City for years, momentum kicked in after Pope Benedict XVI's Motu Proprio in July of 2007. At that time the Pontiff urged easy accessibility to the ancient rite. For the first time since the close of the Second Vatican Council in the 1960s, Catholics in parishes throughout the world were told that if they wanted a TLM in their parish, all they had to do was form a small group and request it from their church pastor.

In the Philadelphia-Lancaster-New Jersey area, the number of parishes hosting TLM's are growing. Every month seems to bring in a new parish, a new inquiry. The traditional Masses are attracting people of all ages, from the middle aged to the very young.

Traditional Catholic seminaries like the Fraternity of Saint Peter, as well as traditional convents and monasteries are also reporting a boom in religious vocations.

Beginning on October, 25, 2009, there will be a weekly TLM at St. Paul's church in South Philadelphia. This is good news to St. Paul's pastor, Father Gerald Carey, who calls the October change, "A very natural and beautiful thing." Fr. Carey, who was ordained in 1998, says he first offered the TLM last year during the Year of Saint Paul. "Out of it came requests from the faithful. That's what Motu Proprio is all about. I did get requests from parishioners and outside parishioners, so I asked the Archdiocese how I might accommodate them," Fr. Carey said.

Over 400 people attended the Year of Saint Paul TLM at Fr. Carey's church. The event was so successful a woman came up to Fr. Carey after the Mass and said that after years of being away from the Church, she was coming back.

Years ago, Center City's St. John Evangelist church held regular TLM's but those Masses were eventually moved to Holy Saviour Parish in Norristown. St. Patrick's church on Rittenhouse Square once held Latin Novus Ordo Masses (or the Mass of Pope Paul VI) twice a month until the death of its pastor, Father Fitzpatrick.

TLM's have also been a regular staple of the Carmelite Monastery at 66th Avenue and Old York Road. On Thursday, July 16th, on the feast of Our Lady of Mount Carmel, a Traditional Latin Solemn High Mass will be held at 7:30 p.m., complete with monastery choir and guest soprano, Dolores Ferraro. The nuns will sing the traditional Carmelite chant, the Flos Carmeli.

Fr. Carey says that shortly after the Motu Proprio was issued, he availed himself of an official TLM training session the Archdiocese was offering to priests.

He explains that the process of instituting a TLM is more than just a language thing. Planning a TLM means that the church in question must have altar rails (for traditional kneeling at communion), and altar boys trained in the Latin responses. (If an altar rail has been removed from a church, it's possible to improvise a "substitute") In a TLM, the priest as well as the congregation will face east, and the tabernacle must be on the main altar.

Facing East is considered a symbol of the rising Son of God.

"The Motu Proprio is a major step, but to approbate it takes time," Fr. Carey said. "You have to make sure if priests want to do this, are you going to ensure that they're going to do it well? And thank God the Cardinal was on our side and really worked hard and provided these workshops. Priests need to know the rubrics. Years ago people grew up with this Mass, they saw it all the time so when you became a priest you sequayed into it. But now you have to study it."

Since the early 1970s The Latin Liturgy Association, Inc. has worked hard to keep the old rite alive.

"When Motu Proprio was first issued," says Philadelphia Latin Liturgy Association Chairman Dr. Rudolph Masciantonio, "the Association sent the Cardinal a proposal asking that the TLM initially be made available in each of the vicariates of the Archdiocese-North and South Philadelphia, and each of the suburban counties. We thought this would be a start to have a TLM in each of the vicariates.We also pitched for a traditional parish in Center City, much like Mater Ecclesiae Roman Catholic Church in Berlin, New Jersey, where all the Masses and rites are traditional."

Dr. Masciantonio says that while the Association didn't receive a written response from the Cardinal, it got something better.

"The Cardinal acted on it. He appointed a priest to be the facilitator of the TLM in the Archdiocese, Msgr. Charles L. Sangermano in Norristown, and he made it a rule that all seminarians train in the traditional rite, as well as the new rite. And he specifically authorized a weekly TLM at St. Paul's beginning October 25th."

"We're very grateful for that," Dr. Masciantonio says, "and the future looks good."

While there are still no traditional Catholic parishes in Center City, Dr. Masciantonio believes that this will change. "More and more people are interested in the traditional Latin Mass. The TLM is one of the best things that the Church has going for it," he said.

The Latin Liturgy Association advocates the preservation of Latin in the Church, even in the "new" Mass of Pope Paul VI. The Constitution on the Sacred Liturgy at Vatican II decreed that, "The use of Latin is to be preserved in the Latin rite." As to the question, "Why Latin?" the Association's website answers that question by reminding readers that "Latin helps us overcome limitations of time and place, and helps us participate in the universal reality of the Catholic Church, linking us with the generations who have worshipped before us."

"Once people get used to these Masses again, and understand how valuable they are spiritually and aesthetically there will be a real reluctance to give them up," Dr. Masciantonio says.

Father Adrian Fortescue, an English liturgical historian and author of the book, "The Mass: A Study of the Roman Liturgy," believed that "the Mass of the Roman Rite is the most venerable in Christendom."

Like historic architecture, how can this venerable rite not be preserved?

"I can assure you that all the priests I know, even if they don't have a familiarity with the Latin language, are very supportive of the TLM," Fr. Carey says. "Most of them say the Mass as the Church directs them, and if they make a mistake it is unintentional. These younger guys really aren't about innovation; they just want to say the Mass."
on August 27, 2009 No comments: 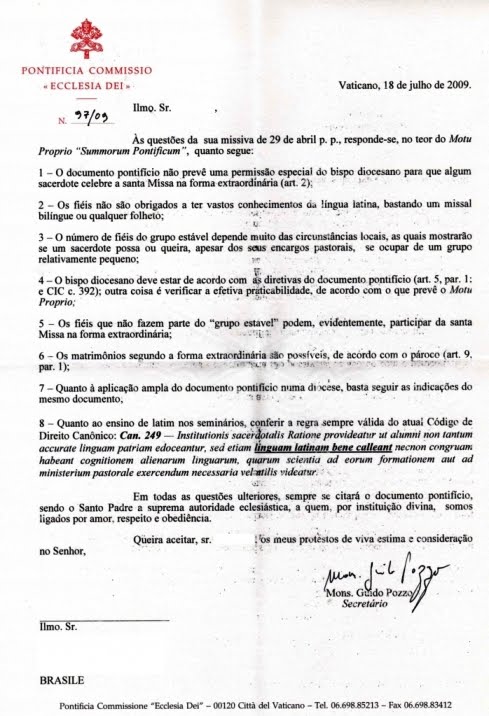 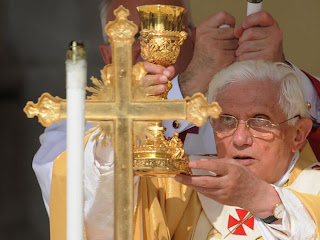