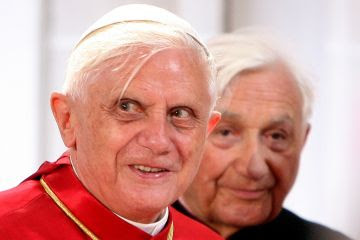 In what is likely to be my last post, at least for the foreseeable future, I would like to quote what Msgr. Georg Ratzinger - the Pope's elder brother - had to say about the liturgy, soon after the promulgation of Summorum Pontificum:

With the Motu Proprio Summorum Pontificum by Pope Benedict XVI the celebration of the so-called Tridentine Mass has been freely given as an extraordinary rite for all the faithful without special permission. I myself often receive letters from people from Munich, Regensburg and from other places, for whom it is truly an inner concern to be able to celebrate the old liturgy again. Certain people did not succeed in finding themselves in the new liturgy. Helping such people is I believe a concern. I must confess that I personally have few problems, but there are people of deep religiosity who cannot be reconciled to the new liturgy. They simply miss a lot that their liturgical celebration and their faith used to enliven and deepen, and that is missing in the current liturgy." (31 August 2007 published on the Wiener Zeitung)

How not to interpret & implement Vatican Council II 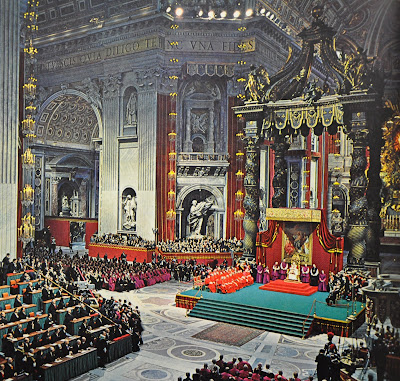 It was pointed out to me that earlier this week, the Malta Environment & Planning Authority (MEPA) board confirmed a decision it took in August whereby 50 parish churches throughout Malta and Gozo were scheduled as grade one buildings. In terms of the scheduling, only restorative works will be allowed to take place on both the internal and external of the building and that even such works can only be carried out with MEPA’s approval and monitoring. In my opinion, this is a step forward although admittedly I do not know the fine details of such a scheduling.
The Maltese Curia has however sought a reconsideration and further discussion, arguing that scheduling should be based on the individual characteristics of each church. Here, I also tend to agree with the Curia. It is what the architect representing the Curia said that I totally disagree with.

He explained that churches were places of worship - not monuments - and therefore changes might be required over time in line with changes to the liturgy, as had happened in the past. The architect specifically pointed out to changes made inside churches in the aftermath of the Second Vatican Council.

Isn't it ironic that the architect condones changes that, at most, should have meant the addition of an altar table? But is this what happened in reality? Hardly so...

a) are we therefore to think that the Curia is in agreement with changes that meant the removal of artistic gates, altar rails, side altars, etc. in a number of churches, including ones built hundreds of years ago?
b) are we to witness again the replacement of stained glass windows with ordinary coloured glass as has happened in a particular parish? The reason given by its parish priest being that the church did not have enough sunlight during the day?

c) and how about the many churches that are being used as stores? In a particular case that I saw with my own eyes, the building that used to serve as a parish church was used as a storage place for, among other things, beer! Yes, beer to be used during the typical band march that is a characteristic of patron saints' feasts in these islands. Not to mention that this church's old baptismal font was thrown away...

In my opinion, the Curia's architect shot himself in the foot when he mentioned the 'changes' made in some churches following Vatican II as a sort of justification. In many cases, these 'changes' amounted to vandalism and nothing else. And surely that was not the way to interpret and implement Vatican II in Malta.

On a more postive note, it is encouraging to note that in the Diocese of Gozo, a number of restoration works have taken place on old altars in the past months. This augurs well.

Concluding, I wish everyone, in particular all the readers and members of Pro Tridentina (Malta), a Blessed Christmas and a serene 2012.
on December 24, 2011 1 comment: 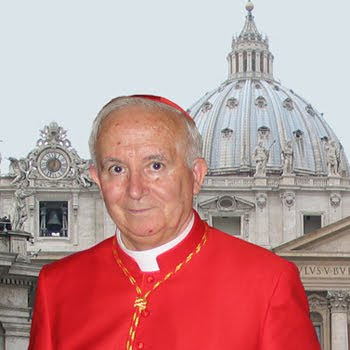 "receive Communion on the tongue and while kneeling. ... It is to simply know that we are before God himself and that He came to us and that we are undeserving ..."

(Communion in this way) “is the sign of adoration that needs to be recovered. I think the entire Church needs to receive Communion while kneeling. In fact, if one receives while standing, a genuflection or profound bow should be made, and this is not happening.”

“If we trivialize Communion, we trivialize everything, and we cannot lose a moment as important as that of receiving Communion, of recognizing the real presence of Christ there, of the God who is the love above all loves, as we sing in a hymn in Spanish.”

“Bishops have a unique responsibility ... and we must not fail to fulfill it, because everything we do to ensure that the Eucharist is celebrated properly will ensure proper participation in the Eucharist.”