Quotes to reflect upon (11)


The liturgical movement is thus shown forth as a sign of the providential dispositions of God for the present time, of the movement of the Holy Ghost in the Church, to draw men more closely to the mysteries of the faith and the riches of grace which flow from the active participation of the faithful in the liturgical life.
...

As We have said in the encyclical Mediator Dei, the liturgy is a vital function of the Church as a whole, and not of a single group or “movement” only: “The sacred liturgy is the public worship of the Mystical Body of Jesus Christ in the entirety of its Head and members.”
…

Therefore everything is directed towards God, His service and His glory. The Church, filled with the gifts and the life of God, devotes itself with an interior and spontaneous movement to the adoration and praise of the infinite God, and through the liturgy, renders Him, as from a society, the worship that is due to Him.
…

The solemn liturgical ceremonies are, besides, a profession of faith in action. They express the great truths of faith concerning the inscrutable designs of God’s generosity and His inexhaustible goodness to men, concerning the love and mercy of the heavenly Father for the world, to save which He sent His Son and delivered Him to death. Thus, the Church in the liturgy abundantly dispenses the treasures of the “deposit of faith,” the truth of Christ.

The care of the hierarchy extends still further to everything which contributes to the greater beauty and dignity of the liturgical ceremonies, whether in the matter of places of worship, of furnishings, of liturgical vestments, of sacred music or sacred art.

1) The Action of Christ

What is this principal action of the eucharistic sacrifice? We have spoken of it explicitly in the Allocution of November 2, 1954. We then quoted, first, the teaching of the Council of Trent:

In this divine sacrifice which takes place at Mass, the same Christ is present and is immolated in an unbloody manner who on the cross once and for all offered Himself in a bloody manner . . . . For the victim is one and the same, now offering Himself through the ministry of priests, who then offered Himself on the Cross; only the manner of offering is different.

Therefore it is the priest-celebrant, and he alone, who, putting on the person of Christ, sacrifices: not the people, nor clerics, nor even priests who reverently assist. All these, however, can and should take an active part in the sacrifice.

2) The Presence of Christ

Anyone who adheres sincerely to this doctrine does not think of the formulating objections against the presence of the tabernacle on the altar. In the Instruction of the Holy Office “On Sacred Art” of June 30, 1952, the Holy See insists, among other things, on this point:

This Supreme Sacred Congregation strictly commands that the prescriptions of Canons 1268, par. 2, and 1269, par. 1, be faithfully observed: “The Most Blessed Sacrament should be kept in the most distinguished and honorable place in the church, and hence as a rule at the main altar unless some other be considered more convenient and suitable for the veneration and worship due to so great a Sacrament. . . . The Most Blessed Sacrament must be kept in an immovable tabernacle set in the middle of the altar.”

It is not so much to the material presence of the tabernacle on the altar as to a tendency toward a lesser esteem for the presence and the action of Christ in the tabernacle that We would like to draw your attention. The sacrifice of the altar is considered sufficient, and the importance of Him who accomplished it is diminished. But the person of the Lord must occupy the centre of worship, for it is that which unifies the relations of the altar and the tabernacle and gives to them their meaning.

3) The Infinite and Divine Majesty of Christ

The liturgy and the past. In the matter of liturgy, as in many other spheres, one must avoid two extreme attitudes with regard to the past: a blind attachment and a complete contempt. There are found in the liturgy unchangeable elements, a sacred content which transcends time, but also elements which are variable and transitory, and sometimes even imperfect. The present-day attitude of liturgical milieux towards the past seems to Us in general to be entirely sound: there is investigation, serious study, attachment to that which truly deserves it, without, moreover, a falling into excess. Here and there, however, there appear ideas and erring tendencies, oppositions, enthusiasms or condemnations with whose concrete from you are well acquainted and of which We have said a word above.

The liturgy and the present time. the liturgy confers on the life of the Church, and even on the whole religious attitude of today, a characteristic mark. Above all, one notices an active and intelligent participation by the faithful in liturgical actions. On the part of the Church, the liturgy today admits of a preoccupation with progress, but also with conservation and defence. She returns to the past without slavishly copying it, and creates anew in the ceremonies themselves, in the use of the vernacular, in popular chant and in the building of churches. It would be, however, superfluous to recall once again that the Church has serious reasons for retaining steadfastly in the Latin rite the unconditional obligation of the celebrating priest to use the Latin language, and, likewise, for insisting that the Gregorian chant at the holy sacrifice shall be in the language of the Church. The faithful, on their part, are concerned with responding to the measures taken by the Church, but in so doing they adopt profoundly different attitudes. Some will show readiness, enthusiasm, occasionally even a too active desire, which demands interventions of authority. Others will show indifference and even opposition. Thus is manifested the diversity of temperaments, as also preferences for individual piety or for community worship.

Allocution by Pope Pius XII, taken from The Assisi Papers: Proceedings of the First International Congress of Pastoral Liturgy, Assisi-Rome, September 18-22, 1956. Published as a Supplement to Worship, by The Liturgical Press, Collegeville, Minn, 1957: pp. 223-236. 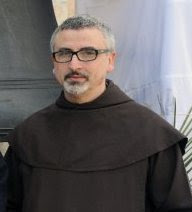 Fr Martin Borg has a very good and clear knowledge about the life and the person of St Theresa of Avila. He is also an accomplished artist and has restored several ecclesiastical works of art around Malta.
Fr Borg was also involved in acquiring a new bell for the St. Theresa's Church in Cospicua.

According to Article 3 of the motu proprio Summorum Pontificum:

Communities of Institutes of consecrated life and of Societies of apostolic life, of either pontifical or diocesan right, wishing to celebrate Mass in accordance with the edition of the Roman Missal promulgated in 1962, for conventual or "community" celebration in their oratories, may do so. If an individual community or an entire Institute or Society wishes to undertake such celebrations often, habitually or permanently, the decision must be taken by the Superiors Major, in accordance with the law and following their own specific decrees and statues.

Fr Martin is one of those who has implemented this Article. He regularly celebrates Mass in the Extraordinary Form of the Roman Rite and has also - on occasions - celebrated Mass for members of Pro Tridentina (Malta).
on December 07, 2015 No comments: