The most important moment of my life 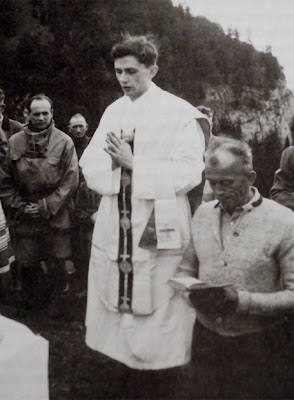 Sixty years ago, 29 June 1951, Joseph Ratzinger was ordained a priest

The most important moment of my life - When the Archbishop laid his hands on me, a lark sang a joyful song

In his essential and limpid autobiographical account published in 1997 – the original German is entitled Aus meinem Leben. Erinnerungen 1927-1977 (Milestones: Memoirs 1927-1977) – Joseph Ratzinger remembers with vivid simplicity his ordination to the priesthood. The great German Catholic Cardinal, Michael von Faulhaber (1869-1952), distinguished biblicist and patrologist, Archbishop of Munich and Freising from 1917, who during the dark years of the Third Reich had become one of the most courageous critics of Hitler’s regime, laid his hands on the 24-year old deacon in June 1951 and on his older brother Georg and 42 other young men.


“We were more than forty candidates, who, at the solemn call on that radiant summer day, which I remember as the high point of my life, responded “Adsum”, Here I am. We should not be superstitious; but, at that moment when the elderly archbishop laid his hands on me, a little bird—perhaps a lark—flew up from the high altar in the cathedral and trilled a little joyful song. And I could not but see in this a reassurance from on high, as if I heard the words “This is good, you are on the right way.” There then followed four summer weeks that were like an unending feast. On the day of our first Holy Mass, our parish church of Saint Oswald gleamed in all its splendor, and the joy that almost palpably filled the whole place drew everyone there into the most living mode of “active participation” in the sacred event, but this did not require any external busyness. We were invited to bring the first blessing into people’s homes, and everywhere we were received even by total strangers with a warmth and affection I had not thought possible until that day. In this way I learned firsthand how earnestly people wait for a priest, how much they long for the blessing that flows from the power of the sacrament. The point was not my own or my brother’s person. What could we two young men represent all by ourselves to the many people we were now meeting? In us they saw persons who had been touched by Christ’s mission and had been empowered to bring his nearness to men. Precisely because we ourselves were not the point, a friendly human relationship could develop very quickly.”

A priest for sixty years, Joseph Ratzinger carries out daily, with humility and transparence, the work of making the one Lord of the world and of history present to women and men of our time. For this, the Osservatore Romano offers Benedict XVI its best wishes, sure that its sentiments are echoed not only by those in the Catholic Church but by many others throughout the world. And repeats for him the words of the ancient prayer for the Pope, invoking Christ’s protection and the only happiness that counts: Dominus conservet eum, vivificet eum, beatum faciat eum in terra et non tradat eum in animam inimicorum eius.

Godwin's comment: on this special occasion and being also the feast of Sts. Peter and Paul, to my mind comes also the hymn dedicated to these two apostles: 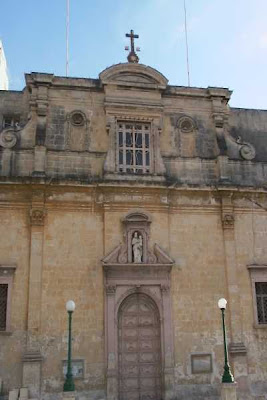 Tridentine Mass will be held on the 16th July 2011 on the occasion of the Feast of Our Lady of Mount Carmel.

Time: to be announced 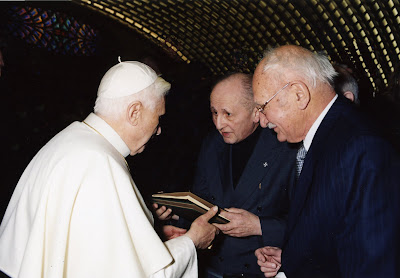 Fra Freddy Crichton-Stuart (photo, centre) died this morning (Tuesday 14th June) in Edinburgh after a long illness. Fra Freddy was President of the FIUV between 2005 and 2006, Chairman of Una Voce Scotland and the Grand Prior of England in the Knights of Malta since 2008.

Fra’ Freddy Crichton-Stuart was a man of prayer whose love of and commitment to the Order of Malta, its traditions and works, was exemplary and inspirational.

The condolences of Pro Tridentina (Malta) are extended to his family and his many friends.

We used to exchange e-mails regularly and I told him about the encouraging developments in Malta. He was very interested and his help was much appreciated.

Vatican: girls are not permitted to serve at old Mass 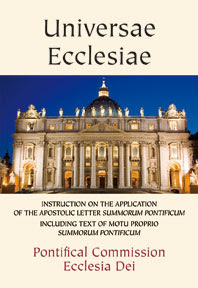 The Pontifical Commission Ecclesia Dei has clarified that girls are not allowed to serve at the Extraordinary Form of the Mass.

It made clear that the Instruction on Summorum Pontificum, Universae Ecclesiae, does not permit female altar servers at the older Mass.

Universae Ecclesiae states “the Moto Proprio Summorum Pontificum derogates from those provisions of law, connected with the Sacred Rites, promulgated from 1962 onwards and incompatible with the rubrics of the liturgical books in effect in 1962″. Permission for female altar servers came with the Circular Letter of the Congregation for Divine Worship and Discipline of the Sacraments of 1994. However, the rubrics of the 1962 Missal did not allow for females on the sanctuary during Mass.

The letter, signed by Mgr Guido Pozzo, Secretary of Ecclesia Dei, said that “permitting female altar servers does not apply to the Extraordinary Form”.

Fr Alban McCoy, university chaplain at Cambridge, has celebrated the Extraordinary Form with female altar servers. He said he did not seek to include women in his team of servers but “decided not to refuse the request of two young women to serve in the old form”.

His team includes six boys and four girls. “We have one team of servers for all Masses – Ordinary and Extraordinary; one rite of liturgy, one set of servers.”

A spokesman for the Latin Mass Society said the clarification was “significant” and that all bishops should practice in accordance with what has been stated in the letter.

Godwin's comment: this is an important clarification from the Pontifical Commission Ecclesia Dei and we must keep our eyes open to ensure that no other abuses take place.
on June 08, 2011 No comments: