R.I.P. to pro-life Catholic British M.P. murdered by an Islamist

VATICAN CITY — Sir David Amess, who was tragically killed on Friday in a knife attack in England, was a committed pro-life British politician whose death has also shocked many in Rome where he is well remembered for his timely work to improve U.K.-Holy See relations.

The 69-year-old devout Catholic father of five and one of Britain’s longest-serving parliamentarians made frequent visits to the Vatican as founder and chairman of the All-Party Parliamentary Group on the Holy See.

The group, which he created in 2006 at a time when the Foreign and Commonwealth Office planned to cut back and possibly even close its embassy to the Holy See, is made up of politicians of different faiths and backgrounds. It was the first such parliamentary group in the world and continues to this day.

The group is especially credited with helping to pave the way for Pope Benedict XVI’s state visit to Britain in 2010, and in particular Benedict’s historic address to both Houses of Parliament in Westminster Hall. It then helped secure a return visit of British government ministers to the Vatican the following year.

Cardinal Vincent Nichols of Westminster recalled this in his tribute on Friday, saying the British Conservative politician fostered “this mutually respectful relationship” between the U.K. and the Holy See through meetings with Cardinal Pietro Parolin, the Vatican Secretary of State, and other Catholic leaders.

“His contribution,” the cardinal said, “is both esteemed and will be sorely missed.”

Francis Campbell, who worked closely with Amess as Britain’s ambassador to the Holy See from 2005 to 2011, told the Register that “he did so much to help build ties and one of his proudest moments was to see Pope Benedict.” He added that Amess was “a great builder of relationships across parliament and was so supportive of [Benedict XVI’s] visit.”

“David was such a kind and generous person who gave so much,” Campbell said. “He was so jovial and engaged, always building bridges and working on issues to strengthen ties. His loss will be greatly felt.”

Defender of Life and the Persecuted

Meeting him in Rome in 2007, Amess told me he was a “born optimist” and that he remained positive that legislation in favor of human embryo research and abortion could be defeated. He believed this despite proponents greatly outnumbering the opposition and the fact that Gordon Brown, no friend to the pro-life cause, had just become Prime Minister.

In that interview, Amess revealed his pro-life conviction and determination to defend the voiceless in politics, lamenting how there had been “less and less interest in terms of the sanctity of life.”

“From my point of view, I cannot see why anyone comes into parliament unless they recognize that life is all-important,” Amess said. “We, as parliamentarians, have our own concepts on the way we wish to create an environment in which people live, but life itself should be everything that motivates us.”

He went on to say that he remained “puzzled why a number of parliamentarians still cannot accept that life is sacred and that it’s up to the ‘mother of all parliaments’ to protect life in law.”

Catherine Robinson, spokesperson for Right To Life UK, said Amess was a “passionate and dedicated patron of our charity” and “a pro-life champion” (see his pro-life voting record here).

“Since he was elected in 1983, he always, where possible, used his position as an MP to stand up for the vulnerable, including championing initiatives to introduce more protections for unborn babies and more support for women facing crisis pregnancies,” Robinson said.

He also voted against assisted suicide, telling fellow parliamentarians in a 2015 debate on the subject: “We all came into politics to help improve people’s lives. I, along with all colleagues, want to assist people to live, so I urge the House to reject this bill.”

Amess’ commitment to religious liberty and his defense of persecuted Christians were also remembered. Fiona Bruce, Prime Minister Boris Johnson’s special envoy for religious freedom, said he “was always faithfully pro-life and faithfully pro family. A dear man with a humble manner and a gentle humor which built friendships across the House. The phrase ‘will be sorely missed’ can be overused, but not with reference to David.”

Neville Kyrke-Smith, national director of Aid to the Church in Need UK, said Amess regularly attended their events and “did much to speak up for the needs of persecuted Christians and others.”

“His death is an attack against parliamentary democracy in this country but more importantly, is a devastating blow to his wife and children and all who knew and respected him and his achievements,” he said.

The Catholic pro-life peer Lord David Alton, a longstanding friend and parliamentary colleague of Amess, said he heard the news “with profound sorrow” and recalled that just a few weeks earlier, they shared a platform at the launch of Amess’ book Ayes & Ears documenting his political career spanning nearly 40 years.

“Typically of David, the proceeds of the book were dedicated to three charities: Endometriosis UK, Prost8 and the Leigh-based Music Man Project,” he said.

“Notwithstanding all the good in the world, we still have the capacity to do truly evil things,” Lord Alton added. “This horrific attack has not only robbed David of his life, but its reverberations will have devastating consequences for his family and loved ones. My thoughts are with Julia and their children. May he now rest in peace.”

Another close parliamentary friend and colleague, Ann Widdecombe, told the Register: “David was a faithful servant of the Lord and a huge source of inspiration to so many colleagues.” A godmother to one of Amess’ children, Widdecombe added: “He will be achingly missed.”

Sir Christian Sweeting, a friend of Amess within the Conservative Party, told the Register, “David was always smiling, he was full of kindness, humor and unstinting in his compassion for others, especially the disadvantaged and the voiceless.

“It’s indescribably sad that he should fall victim to such a misguided and brutal act. He will be remembered as a great Parliamentarian and as a tremendous humanitarian. My deepest sympathies and prayers are with his family and those who loved and knew him.” 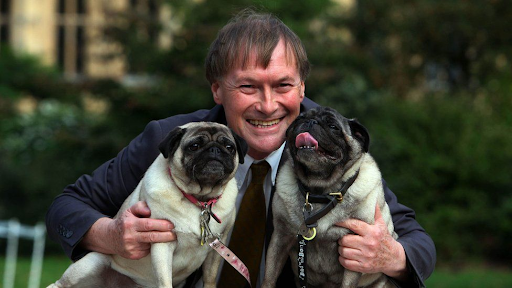