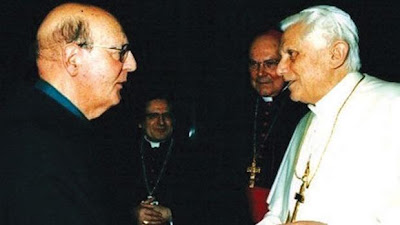 Fr. Prospero Grech OSA with Pope Benedict XVI (Photo by courtesy of the Order of Saint Augustine)
Before the Angelus Prayer offered on the Feast of the Epiphany, Pope Benedict XVI announced the creation of 22 new Cardinals. Among them was our own Fr Prospero Grech OSA, presently and for decades a member of the community of Collegio Santa Monica, Rome. Father Grech, age 86, a well-known and highly respected Scripture Scholar will become the second Maltese Cardinal.

Letter of the Augustinians' Prior General

It is with great joy that I send this communication, to share with you the news that the Holy Father, Pope Benedict XVI, announced today that our brother, Fr Prosper Grech, of the Province of Malta and long-time resident at the International College of St. Monica in Rome, has been chosen to become a Cardinal.

Today, January 6th, the Pope announced his decision to celebrate a Concistory on February 18th, with the intention of creating 22 new cardinals. Among the names of those chosen, is our brother Fr Grech. Fr Prosper, 86 years of age, entered the Order in Malta in 1943, and was ordained to the priesthood in 1950. He has served for many years in Rome, almost all of them as a member of the community at St. Monica’s. He is a well known professor of Sacred Scripture, and has been a professor at various universities in Rome, especially the Biblicum, but also the Lateran and Gregorian Universities. He is the co-founder and first President of our Patristic Institute, the Augustinianum. He has also collaborated with numerous dicasteries of the Holy See, especially the Congregation for the Doctrine of the Faith.

In his proclamation made today, the Holy Father announced with great joy the Concistory for creating new Cardinals, among whom he has chosen outstanding churchmen who are especially distinguished for their service to the Church. Our brother Fr Prosper Grech was one of those chosen.

For this we are deeply grateful to God and to our Holy Father Pope Benedict. We express our congratulations to Fr Grech and we rejoice in this recognition of his many years of service, especially in his dedication to the study and teaching of the Word of God.

Fr Grech will be ordained bishop in the Co-Cathedral of Saint John, Valletta, Malta, on Wednesday, 8 February, 2012. His episcopal coat of arms is diagonally divided into two equal parts with the Maltese cross on a red background on one side and the coat of arms of the Order of St Augustine on a dark blue background on the other. The motto chosen is In te Domine speravi.

The Concistory during which the future Fr Prospero will become Cardinal is to be held on the morning of Saturday, 18 February, in Saint Peter's Basilica. The following day the new Cardinals will concelebrate Mass with the Holy Father also in Saint Peter's.

Highlights from his Biography

Born 1925 in Birgu, Malta, Grech studied at the Lyceum and served as gunner of the University Home Guard during the Second World War.

Grech joined the Augustinian Order in 1943 and seven years later was ordained at San Giovanni Laterano in Rome. After graduating Doctor of Theology from the Gregorian University, Rome (1953), Grech conducted research in Semitic languages at Oxford (1957-58) and Cambridge (1958-59) Universities.

Fr Prospero Grech served as professor at the Augustine Institute, Rome and founded the Istituto Patristico Augostinianum, Rome in 1970. He is a member of the Societas Studiorum Novi Testamenti (SNTS) and member of the Pontifical Biblical Commission. He has lectured for over thirty years at the Pontifical Biblical Institute in Rome on hermeneutics.

Fr Grech was professor of Biblical Theology at the Lateran University, Rome, Counsellor to the Sacred Congregation for the Doctrine of Faith and Secretary of the Maltese Augustinian province. He was also nominated Apostolic Visitor for seminaries in India.

Fr Grech and the Popes

During the time of the conclave that elected Paul VI in 1963, just two hours before the Pope was elected, Cardinal Montini asked Fr Grech to hear his confession.

Fr Grech was a great personal friend of Cardinal Albino Luciani when the latter was still Patriarch of Venice. The cardinal used to take up residence at the Augustinian College in Rome whenever he was in the capital to attend meetings of the Italian Bishops’ Conference. Fr Grech used to celebrate Mass and have lunch together with Cardinal Luciani.

The very first letter Pope John Paul I wrote soon after he was elected in August 1978 was one of thanks to Fr Grech for the hospitality and friendship he had always received at St Monica’s Augustinian College.

Pope John Paul II occasionally invited Cardinal Ratzinger, who was then Secretary of the Congregation of the Faith, to lunch. Fr Grech would also be invited.

Fr Grech was also involved in negotiations between the Malta Labour Party (MLP) and the Vatican when attempts were made to solve Malta’s politico-religious dispute of the 1960s. Dom Mintoff, then Labour leader, wanted to start discussions with the Vatican about pending issues and asked Fr Grech to intervene so that negotiations could start.

Fr Grech accepted the invitation and immediately informed the Vatican’s Secretariat of State about this request. He was asked to tell Mr Mintoff to put down in writing what the MLP leader was proposing. Subsequently Fr Grech met Mr Mintoff and returned to the Vatican with the proposals.

After examining them, the Secretariat of State told Fr Grech that the proposals could be a basis for discussion. He was then instructed to inform Malta's Archbishop Michael Gonzi what had happened so that negotiations could start. However, when Fr Grech informed the Archbishop in writing and explained what had happened, Gonzi was furious.

Mr Mintoff was no less infuriated when he learned of the Maltese bishops’ reactions to his plans which had been made public. Both the Archbishop and Mr Mintoff were less than grateful to Fr Grech. According to reliable sources Fr Grech’s involvement in the whole matter could have cost the prominent Biblical scholar his chance to be nominated auxiliary bishop of Malta.

On 13 December 2011, Fr Grech received the honour of Companion of the National Order of Merit by President George Abela, in the name of the government and people of Malta. This honour and especially his nomination to the College of Cardinals more than make up for the unfair treatment he received decades ago. 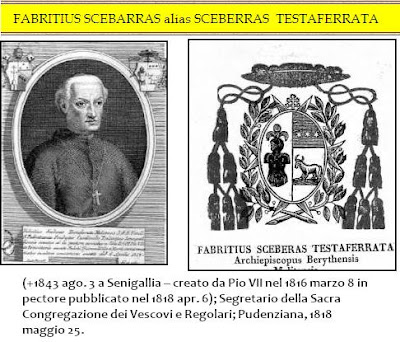 The first Maltese Cardinal - Fabrizio Sceberras Testaferrata (1757-1843) - was born in Valletta. He was Titular Archbishop of Berytus (1802), Apostolic Nuncio to Switzerland (1803) and Secretary of the Congregation of Bishops and Regulars (1815).

Sceberras Testaferrata was created Cardinal in pectore in 1816 and elevated to Cardinal-Priest of St. Pudenziana two years later. Subsequently he was Bishop of Senigallia until his death.

By this time, Cardinal Sceberras Testaferrata was among the most senior in the College of Cardinals. He was never absent from a conclave.
on January 31, 2012 2 comments: 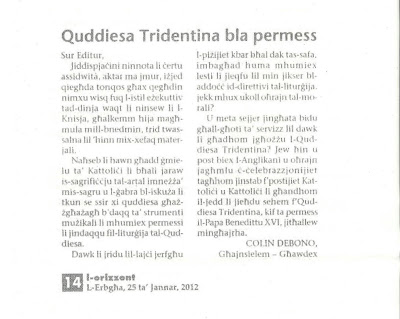 A letter complaining about the lack of Tridentine Masses in Gozo published in today's L-Orizzont (a Maltese left leaning national daily).
on January 25, 2012 No comments:

Quotes to keep in mind when discussing with parish priests and bishops ... 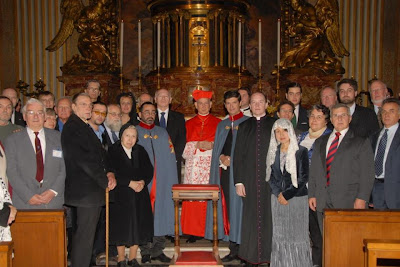 Photo: Cardinal Castrillon Hoyos (centre) with members of the FIUV Council and other faithful (November 2011)

The below quotes by Cardinal Dario Castrillon Hoyos are useful in discussions between laity and the parish priests / bishops to show what the Pope's intentions are:

"The Holy Father, who is a theologian and who was (involved) in the preparation for the (Vatican II - my note) council, is acting exactly in the way of the council, offering with freedom the different kinds of celebration."

"(Pope Benedict wants - my note) All the parishes. Not many, all the parishes (to make provisions for the Tridentine Mass - my note), because this is a gift of God. He offers these riches, and it is very important for new generations to know the past of the church."

"This kind of worship is so noble, so beautiful. The worship, the music, the architecture, the painting, makes a whole that is a treasure. The Holy Father is willing to offer to all the people this possibility, not only for the few groups who demand it but so that everybody knows this way of celebrating the Eucharist in the Catholic Church."

Way back in 2007/2008, the Pontifical Commission Ecclesia Dei (PCED) wrote to all seminaries to ask that candidates to the priesthood are trained to celebrate Mass according to the Extraordinary Form of the Latin rite, and also to understand the theology, the philosophy and the language of such Masses.

In Summorum Pontificum, Pope Benedict XVI had indicated that Tridentine Masses should be made available in every parish where groups of the faithful desire it and where a priest has been trained to celebrate it. Cardinal Castrillon Hoyos had indicated that a stable group could mean just three or four people who were not necessarily drawn from the same parish. This has been the main stumbling block in Malta for seemingly unknown reasons.

"Different parishes or dioceses" was inserted in Universae Ecclesiae following pressure from traditional Catholics, including in particular from Malta. I had been involved in informal discussions with the Roman Curia for the previous 18 months and this insertion should have cleared the minds of the local Curia. But, with few exceptions, the status quo has remained.

Concluding, my advice to Pro Tridentina (Malta) and other laity in these islands is to press the local church authorities by referring to these issues and others raised in previous contributions in this Blog. Should discussions fail, the motu proprio and the instruction clearly indicate the other available routes. 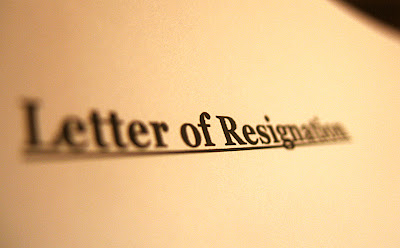 Due to unforeseen personal circumstances, with effect from today, Godwin Xuereb has resigned from the posts in Pro Tridentina (Malta) and the Foederatio Internationalis Una Voce. The name of this Blog has changed to Perspettiva Kattolika (Catholic Perspective).
on January 06, 2012 1 comment: