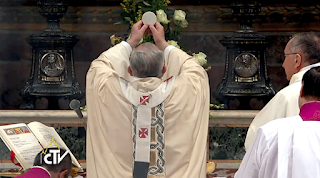 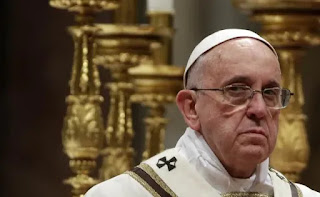 Pope Francis took a significant step toward putting the Roman Catholic Church’s liturgy solidly on the side of modernization on 16 July by cracking down on the use of the Tridentine Mass, essentially reversing a decision by his predecessor, Benedict XVI. This reverses Summorum Pontificum, which acknowledged the right of all priests to say Mass using the Roman Missal of 1962, which is in Latin. The move to restrict the use of the Tridentine rite dealt a blow to traditional Catholics, who have long complained that the current pope is diluting the traditions of the church. Francis placed new restrictions on where and by whom the traditional Latin Mass can be celebrated and required new permissions from local bishops for its use. In the motu proprio, the pope made sweeping changes to his predecessor Benedict XVI’s 2007 apostolic letter The new document is dedicated to “the use of the Roman Liturgy prior to the reform of 1970” and contains eight articles that go into immediate effect. Pro Tridentina (Malta) has asked the reaction of 2 priests: Canadian Fr N.E.D. Doublet and Fr Tony. The latter celebrates Tridentine Mass in Malta. Fr Doublet expects that restrictions will be applied to the Canadian priests that currently celebrate Tridentine Mass in his country. There are currently around 45 churches where the Tridentine Mass is held in Canada. Some bishops have already suspended the Latin Mass due on Sunday 18 July. So, worse can be expected. Fr Doublet added that the publication of the motu proprio so soon after Pope Francis left hospital can only be considered as being a vengeful act. One now has to see whether Benedict XVI will react, though it is unlikely. Fr Doublet concluded that the Church now has a suffering Pope - Benedict XVI, victim of hatred unleashed on him by Francis. On the other hand, Fr Tony said that the situation in Malta is likely to remain the same. The Diocese of Gozo will probably do nothing, after all no known Tridentine Masses have been celebrated there since 2007. This was due to the hardline policy adopted by then Bishop (now Cardinal) Mario Grech. There are rumours circulating in the Vatican that the Gozitan Cardinal showed his appreciation of the new mtou proprio Traditionis custodes, especially Articles 3 and 5. The situation in Malta is more complicated. According to Fr Tony, it is hoped that the structure of the Apostolate of St. Paul Malta will remain. Albeit the irony being having a Tridentine Mass held in a Jesuit Church during the Jesuit's Pope hardline attitude, added Fr Tony. Regarding himself personally, Fr Tony stressed that he will continue to celebrate Tridentine Mass regularly, as long as people want it. He concluded by reminding us that Benedict XVI had said:

What earlier generations held as sacred, remains sacred and great for us too, and it cannot be all of a sudden entirely forbidden or even considered harmful

As a service to its readers, Pro Tridentina (Malta)has added 2 pages on this topic: a) the text of Traditionis custodes https://pro-tridentina-malta.blogspot.com/p/traditionis-custodes.html and b) the letter written by Pope Francis to bishops about this motu proprio https://pro-tridentina-malta.blogspot.com/p/pope-francis-letter-accompamying.html
on July 16, 2021 No comments: 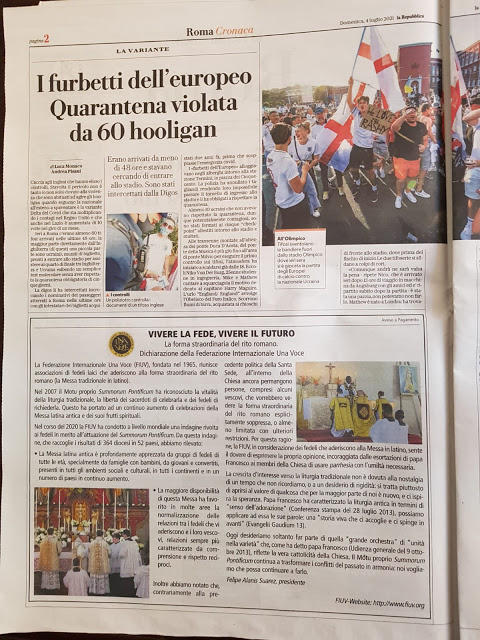 The FIUV has taken out an advert in the mass-circulation Italian newspaper La Repubblica, that appeared on Sunday 4th July 2021. This newspaper is Pope Francis' favourite.

The English text is below:

Living the faith, living the future:
The Extraordinary Form of the Roman Rite
Declaration of the International Federation Una Voce

The International Federation Una Voce (FIUV), founded in 1965, brings together associations of the lay faithful attached to the Extraordinary Form of the Roman rite (the Traditional Latin Mass).

In 2007, the Apostolic Letter Summorum Pontificum recognised the vitality of the traditional liturgy, the freedom of priests to celebrate it, and of the faithful to request it. This has led to an ongoing increase in the number of celebrations of the ancient Latin Mass, and of its spiritual fruits.

During 2020 the FIUV conducted a worldwide survey of the faithful on the implementation of Summorum Pontificum. From this survey, which included results from 364 dioceses in 52 countries, we found:

•    The ancient Latin Mass is deeply appreciated by groups of faithful of all ages, especially families with children, young people and converts, found in all social and cultural environments, on all continents and in an ever increasing number of countries.

• In many areas the increased availability of this Mass has favoured the normalisation of relations between the faithful attached to it and their bishops, relations increasingly characterised by mutual understanding and respect.

Nevertheless, we have noticed that, contrary to the previous policy of the Holy See, there are still people within the Church, including some bishops, who would like to see the Extraordinary Form of the Roman rite explicitly suppressed, or subject to further restrictions. For this reason, the FIUV, in view of the faithful who adhere to the Latin Mass, feels the duty to express its opinion, encouraged by Pope Francis' exhortations to the members of the Church to use parrhesia with the necessary humility.

The growth of interest in the traditional liturgy is not due to nostalgia for a time we do not remember, or a desire for rigidity: it is rather a matter of opening ourselves to the value of something that for most of us is new, and inspires hope. Pope Francis has characterised the ancient liturgy in terms of a "sense of adoration" (Press conference of 28 July 2013), we can also apply his words to it: a "living history that welcomes us and pushes us forward" (Evangelii Gaudium 13).

Today we only wish to be part of that "great orchestra" of "unity in variety" which, as Pope Francis said (General Audience of 9 October 2013), reflects the true catholicity of the Church. The Apostolic Letter Summorum Pontificum continues to transform the conflicts of the past into harmony: long may it to continue to do so.

The worldwide survey referred to above was presented to the Congregation for the Doctrine of the Faith, to complement reports sent by bishops around the world on the same subject, which had been requested by the CDF at the request of Pope Francis. Gregorius Magnus 10 has an account of the motivation, methodology, results, and conclusions of the reports. Pro Tridentina (Malta)'s contribution is found on pp. 11 - 12.