Pentecost, the Church's birthday, is something to celebrate! The below words by Benedict XVI should help us reflect whether we i.e. priests and laity, are celebrating it in a worthy manner.

“The Church is most truly itself in the liturgy, as it is the place where God comes to us and enters our lives.  Let us remember that the liturgy is celebrated for God, not for us; it is His work; He is its subject.”
Benedict XVI, General Audience, 3 October 2012.


This is a famous Catholic Gregorian chant hymn, actually the Vespers hymn for the feast of Pentecost. It is traditionally sung during ordinations to the priesthood, while the Bishop imposes his hands on each of the ordinands and actually imprints the priestly character on their souls. It is also usually sung on the occasion of Confirmation. Veni creator Spiritus was written by Rabanus Maurus (776-856). 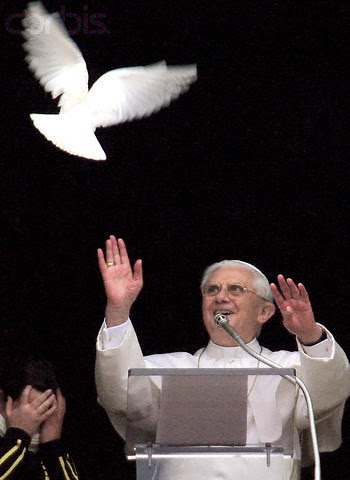 These prophecies were made by 1820 by Anna Catherine Emmerich, a stigmatized Augustinian nun who bore the wounds of Jesus on her body and who lived many years solely on the Holy Communion until  she died. She was given many visions of our Blessed Lord and Lady including their earthly lives, printed into books. The following prophecies were recorded in The Life of Anne Catherine Emmerich (1870) by Rev. Carl Schmoeger, C.SS.R.
In many cases the similarities with the post-Vatican II traumas suffered by the Church are striking.


1.  "Among the strangest things that I saw, were long processions of bishops. Their thoughts and utterances were made known to me through images issuing from their mouths. Their faults towards religion were shown by external deformities ... I saw what I believe to be nearly all the bishops of the world, but only a small number were perfectly sound. I also saw the Holy Father - God-fearing and prayerful. Nothing left to be desired in his appearance, but he was weakened by old age and by much suffering. His head was lolling from side to side, and it dropped onto his chest as if he was falling asleep ...Then I saw that everything pertaining to Protestantism was gradually gaining the upperhand, and the Catholic religion fell into complete decadence. Most priests were lured by the glittering but false knowledge of young school-teachers, and they all contributed to the work of destruction. In those days, Faith will fall very low, and it will be preserved in some places only, in a few cottages and in a few families which God has protected from disasters and wars." This seems to be an allusion to the last months of the pontificate of Benedict XVI and the Vatileaks scandal.

2. "I saw also the relationship between two popes ... I saw how baleful would be the consequences of this false church. I saw it increase in size; heretics of every kind came into the city of Rome. The local clergy grew lukewarm, and I saw a great darkness... I had another vision of the great tribulation. It seems to me that a concession was demanded from the clergy which could not be granted. I saw many older priests, especially one, who wept bitterly. A few younger ones were also weeping. But others, and the lukewarm among them, readily did what was demanded. It was as if people were splitting into two camps." This could (hopefully not) refer to a future situation between popes Francis and Benedict XVI, or perhaps another era when two popes will be living at the same time. Interestingly, the prophecy does not consider any of the popes as being an anti-pope.


3. "I saw that many pastors allowed themselves to be taken up with ideas that were dangerous to the Church. They were building a great, strange, and extravagant Church. Everyone was to be admitted in it in order to be united and have equal rights: Evangelicals, Catholics, sects of every description. Such was to be the new Church ... But God had other designs. ... I saw again the new and odd-looking church which they were trying to build. There was nothing holy about it ... People were kneading  bread in the crypt below ... but it would not rise, nor did they receive the body of our Lord, but only bread. Those who were in error, through no fault of their own, and who piously and ardently longed for the Body of Jesus were spiritually consoled, but not by their communion. ... I saw deplorable things: they were gambling, drinking, and talking in church; they were also courting women. All sorts of abominations were perpetrated there. Priests allowed everything and said Mass with much irreverence. I saw that few of them were still godly... All these things caused me much distress." One is inclined to think that the prophecy refers to abuses by priests on minors, ecumenism implemented erroneously and abuses in the Novus Ordo Missae.

4. "I had a vision of the holy Emperor Henry.  I saw him at night kneeling alone at the foot of the main altar in a great and beautiful church ... and I saw the Blessed Virgin coming down all alone. She laid on the altar a red cloth covered with white linen. She placed a book inlaid with precious stones. She lit the candles and the perpetual lamp. Then came the Saviour Himself clad in priestly vestments. He was carrying the chalice and the veil. Two angels were serving Him and two more were following ... Although there was no altar bell, the cruets were there. The wine was as red as blood, and there was also some water. The Mass was short. The Gospel of St. John was not read at the end. When the Mass had ended, Mary came up to Henry, and she extended her right hand towards him, saying that it was in recognition of his purity. Then she urged him not to falter. Thereupon I saw an angel, and he touched the sinew of his hip, like Jacob. Henry was in great pain; and from that day on he walked with a limp ..." This is quite difficult to understand. But the interesting part is related to the fact that Jesus celebrated a Tridentine Mass without the last part, or else a Novus Ordo Missae in Latin - otherwise Blessed Emmerich would have mentioned the fact that it was in a vulgar tongue.


5. "I saw the Church of St. Peter and an enormous number of people working to demolish it. At the same time I saw others repairing the Church. The demolishers took away large pieces; they were, above all, sectarians and apostates, in the majority. In their destructive work these people seemed to follow certain orders and a certain rule. I saw with horror, that among them were Catholic priests. I saw the Pope praying, surrounded by false friends who frequently, did the contrary of what he had ordered." Could be a reference to the current situation whereby Pope Francis will attempt to reform the Roman Curia after Vatileaks.

6. "In the centre of Hell I saw a dark and horrible-looking abyss, and into this Lucifer was cast, after being first strongly secured with chains; thick clouds of sulphurous black smoke arose from it's fearful depths and enveloped his fearful form in the dismal folds, thus effectually concealing him from every beholder. God Himself had decreed this; and I was likewise told, if I remember right, that he will be unchained for a time fifty or sixty years before the year of Christ 2000. The dates of many other events were pointed out to me which I do not now remember, but a certain number of demons are to be let loose much earlier than Lucifer, in order to tempt men, and to serve as instruments of divine vengeance." The timing here is particular, 1940 - 1950 coincides with the Second World War but, more importantly, with the following dates: