Pro Tridentina (Malta) is now on LinkedIn. LinkedIn is a business- and employment-oriented social networking service that operates via websites and mobile apps. The aim is to use this medium to organise Tridentine Masses on a regular basis, in particular in the South of Malta and Gozo. Contact us on: 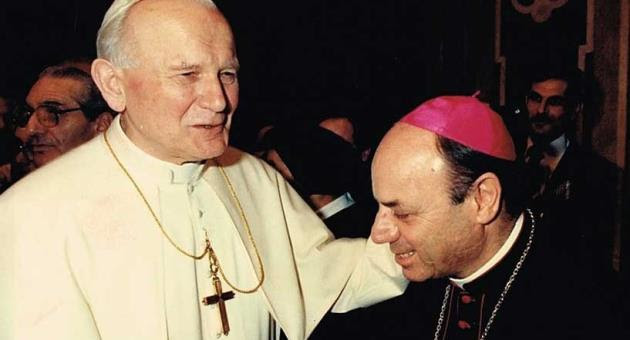 With sadness we announce the death of  Bishop Francis George Adeodatus Micallef, O.C.D., Vicar Apostolic Emeritus of Kuwait, in Malta, who died yesterday, aged 89. As Pro Tridentina (Malta) had reported some years ago, Bishop Micallef was one of the 2 Maltese bishops who have said the Tridentine Mass since Summorum Pontificum. Following is a short biography of this great man, taken from Dictionary of Maltese Biographies, by Michael J. Schiavone:
Micallef was born at Birkirkara and studied at the Lyceum. At the age of 18 he joined the Discalced Carmelites. Between 1950 and 1955 Micallef studied theology in Rome and obtained his licentiate in theology. In 1970 Micallef was elected provincial of the Maltese Discalced Carmelites. In 1973 he served as superior of an international community in Rome until November 1981, when he was appointed apostolic vicar for Kuwait.
Loaded: 0%
Progress: 0%
00:00
Micallef was consecrated bishop by John Paul II at St Peter's Basilica on 6 January 1982. Micallef was the only Catholic bishop in Kuwait during the invasion by Iraq in August 1990, and he was the sole link with the Holy See during this period.
on January 04, 2018 No comments:

The Dangers of Traditional Catholic Isolation in Malta

After the promulgation of Pope Benedict XVI’s Summorum Pontificum, many in Malta began to re-discover, not only the traditional Latin Mass, but also pre-Vatican II morals and teachings.  And they wanted more of it.  Pro Tridentina (Malta) was a catalyst in all this, and its efforts were emulated by other individuals. Some seminarians also approached the group but wanted to remain 'in hiding' so to speak, for fear of harassment by the Church.


People began to go to the Tridentine Mass when it was available, or to the Novus Ordo Mass that retained a vestige of traditional Catholicism. Women began to wear a veil at Church and began to dress a little more modest when they went to Holy Mass. Men went well dressed, not in their t-shirts and shorts.


Afterwards, some began to just go to the Tridentine Mass because they had experienced the liturgical abuse and were tired of it.  They wanted something deeper and more reverent.  They studied how the Catholic Church was before and after Vatican II and were saddened by the ‘disorientation’ of most Catholics.  Then they discovered that the Novus Ordo Mass was made up, unlike all the other Rites in the history or the Catholic Church.

So far so good. But then, isolation came in.  Contrary to what Pro Tridentina (Malta) had worked for, some former members began to see themselves as the fortunate Catholics who now know the truth about the Mass and Vatican II.  They now perceive all the Novus Ordo Catholics as ignorant and wrong.


Another group now encourages these people to stop talking with Novus Ordo Catholics, or going to their events, because of all the evil activities that go along with these gatherings, (bad music, drinking, dressing scantly and dancing).  They do not want to support their perceived immoral lifestyles by hanging around these people.  They also see Novus Ordo people as extremist and fanatics.


This can be a dangerous isolation.  This has already happened in Malta, as is the case with the St. Athanasius ICC or when one becomes a sedevacantist. The Catholic Church in Malta has to monitor such groups - even those that pretend to obey the Archbishop of Malta -  and alert the faithful accordingly. Why are we urging such a course of action, when Pro Tridentina (Malta) and many of its members suffered directly by the actions of the Maltese Curia?

Because almost every sedevacantist, and member of these groups, feel that all people in the institutional Catholic Church are bad, and even some say that they going to hell. Heading towards the sedevacantist position is a very perilous path that could end in complete isolation without a Mass to attend or a priest to administer sacraments.
Pro Tridentina (Malta) believes in staying in the canonical Catholic Church, no matter how bad the Pope, bishops, priests, religious may be.  Since its founding in 2007, it believes in reforming the Church from within, as extremely difficult as that may be. And it will continue to criticise where it sees wrongdoing by people in the Church.

Pro Tridentina (Malta) does not feel superior to Novus Ordo Catholics. Its former first President used to say in fact that we should rather think that God led us to tradition because we are so wicked that we otherwise might not be able to save our souls. Still,  as well as there being traditional Catholics who tend towards isolationism, there are also modernist Catholics who tend towards rejection, demonisation and mockery of traditional Catholics.
on January 01, 2018 No comments: