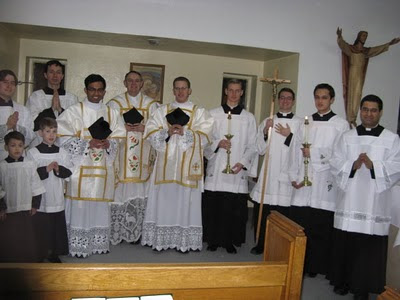 TORONTO--Only three weeks after a Solemn High Mass was held on Candlemas assisted by transitional Deacons and Seminarians of St. Augustine's Seminary in Toronto; and less than a week after a column appeared on Rorate Caeli Blog extolling the provisioning of the Traditional Latin Mass in Ontario, it was announced today after the Mass for Quadragesima Sunday that effective next Sunday, February 28, 2009, the Toronto Apostolate of the Priestly Fraternity of St. Peter will come to an end.

Apostolate Chaplain, Father Howard Venette, FSSP addressed the nearly 100 congregants following the Mass advising the shocked congregation that the departure was due to "internal personnel" matters. Father Venette will be reassigned to Orlando, Florida following his 19 month stay in Toronto.

The FSSP was invited to Toronto by Archbishop Thomas Collins with the hopes of establishing a personal parish for the Extraordinary Form of the Roman Rite. In September 2009, a public announcement was made by the Fraternity and on the Archdiocese of Toronto web page that Canadian Martyrs parish would be the location over a six-month transitional period. Within days of this announcement and without public explanation, the situation changed and the parish plan did not materialise.
Recently, the Fraternity was advised that while a parish was not currently available, its provision would depend on the continued growth and financial viability of the community. In the last 19 months, attendance at the Sunday Mass at St. Theresa Shrine Church increased over 60% from the attendance under the former indult at the Missa Lecta to the Missa Cantata.

It was also announced that Father Liam Gavigan will resume the celebration of the Mass as of Sunday March 7. Father Gavigan is a retired priest living two hours east of Toronto and already celebrates the Mass Sunday at 9:00AM at Schomberg before travelling 49 kilometers to the Carmelite Monastery at Zephyr, Ontario for Mass at 11:30AM. Zephyr is 54 kilometers from the scheduled 1:00PM Mass at St. Theresa Shrine Church in Scarborough through the southern Ontario snow-belt.
Upon arrival in Toronto, Father Venette was in residence at Holy Cross parish where the Mass was celebrated daily and on High Holy Days. Following the situation in September over Canadian Martyrs, Father was moved to St. Brigid's where the daily Mass schedule changed from week to week and the High Holy Day liturgies were split between St. Brigid's and St. Theresa's Parish. That Father was, "in residence" at St. Brigid's parish, was noticeably absent from the parish bulletin and a phone number, separate from the parish was recently necessary.
According to officials from Una Voce Toronto, Archbishop Collins had indicated that he desired no less than "five" Extraordinary Form Masses throughout the Archdiocese of Toronto every Sunday. As for daily Mass, it is unknown how those in the east end, many of them seniors, will fare now that the Fraternity is leaving and not providing daily Mass.
A Solemn High Mass was being planned for St. Theresa's for March 19, the Feast of St. Joseph, Patron Saint of Canada and has now been cancelled. After the departure of Father Venette, the only daily Mass in the Extraordinary Form in the Archdiocese of Toronto will be at The Toronto Oratory Church of the Holy Family. The Society of St. Pius X also operates a "Mass Centre" in Toronto.
The recessional hymn at Mass was appropriately, Take Up Your Cross.
on February 28, 2010 No comments: 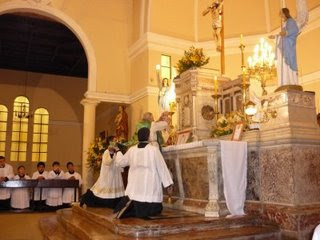 The Pontifical Commission Ecclesia Dei has recently answered some important questions regarding the application of the motu proprio Summorum Pontificum submitted by the moderator for the faithful attached to the Extraordinary Form of the diocese of Rzeszów, Poland. The answers, however, are applicable generally. The original questions (in German) and answers (in Italian), published by Nowy Ruch Liturgiczny are reproduced below (see link - Godwin Xuereb). Here is an NLM summary; questions 2 and 3 have easily the biggest impact:

2. A Mass in the usus antiquior may replace a regularly scheduled Mass in the Ordinary Form. The question contextualizes that in many churches Sunday Masses are more or less scheduled continually, leaving free only very incovenient mid afternoon slots, but this is merely context, the question posed being general. The answer leaves the matter to the prudent judgement of the parish priest, and emphasises the right of a stable group to assist at Mass in the Extraordinary Form.

3. A parish priest may schedule a public Mass in the Extraordinary Form on his own accord (i.e. without the request of a group of faithful) for the benefit of the faithful including those unfamiliar with the usus antiquior. The response of the Commission here is identical to no. 2.

5. While the liturgical readings (Epistle and Gospel) themselves have to be read by the priest (or deacon/subdeacon) as foreseen by the rubrics, a translation to the vernacular may afterwards be read also by a layman.
on February 20, 2010 No comments: