Pope John Paul I and the Tridentine Mass 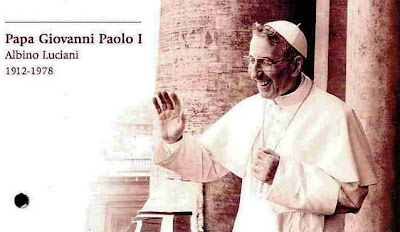 Albino Cardinal Luciani was elected 33 years ago (26 August 1978) and died on 28 September of the same year, amid rumours that he had been assassinated.

Pope John Paul I was also reported to have been ready to restore the Tridentine Mass, notwithstanding earlier opposition during the time he served as Patriarch of Venice. The late Fr Gommar De Pauw, the founder of the Catholic Traditionalist Movement in New York City on 15 March 1965, reported that within days after John Paul I's election, the priest was unexpectedly summoned to the Vatican to participate on a commission to restore the Tridentine Mass. Unfortunately, John Paul I died before the commission could meet.

It is interesting to note that, after John Paul I's death, the man whom he had selected to organise the restoration of the Tridentine Mass fell into obscurity. Most traditional Catholics today do not even know who the 'founder' of their movement in 1965 was, i.e. Fr Gommar De Pauw. They have also forgotten the Pope who was to be the "traditional" whom they had prayed for, John Paul I.

The picture above shows a holy card with the prayer that the Bishop of Belluno composed to obtain Albino Luciani's beatification. It has a small relic from the clothing of Pope John Paul I. Holy cards can be requested at Centro Papa Luciani: centro@papaluciani.it 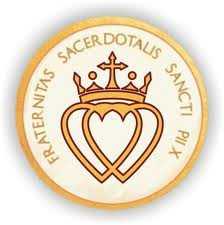 A delegation from SSPX has (allegedly) arrived in Malta yesterday and is holding discussions to establish a presence here.


After their (alleged) first visit earlier this year, I had contacted the General House of the SSPX in Menzingen, Switzerland. However, the news was neither denied nor confirmed.

In any case, none of the four bishops of this Fraternity has come to Malta.
on August 14, 2011 No comments: 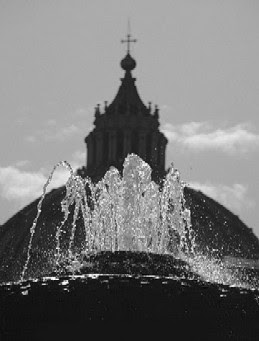 a) Latin is a universal dead language now. Latin is called dead for it does not change such as all the modern languages do, that is why the Roman Catholic Church still uses it. Latin is far from extinct, it provides the true form and root for understanding many legal and medical terms. It is also one of the official languages of the Holy See. And yes, you do not need to know Latin to appreciate this form of the Mass. There are Missals available in Latin with translation into other languages. And even if these are not available, do all the opera goers (to mention one classic example - pun intended) necessarily understand each and every language used in the preformances?

b) The Tridentine Mass is a cause of division among the faithful. This is the preferred argument used by some of the clergy in Malta who are vehemently opposed to this Mass. And yet they fail to acknowledge -or ignore the fact - that other than the Latin Mass there are many valid liturgical rites in the Catholic Church such as the Byzantine, Alexandrian, Syriac, Armenian, Maronite, and Chaldean. I will not attempt here to go into related issues like the fact that Baroque churches in Valletta - originally built for Tridentine Masses - are being used by the Orthodox and the Copts, but are 'not allowed' for Tridentine Masses.

c) Too much symbolism in the Tridentine Mass. This argument is used by some “who make the case for the Novus Ordo Missae” in the sense that this form is closer to the early Christian Mass. But then they do not document or explain what these arguments are. Indeed, studies show that the Last Supper had the sacrificial order of a Jewish Passover where each act had a deep symbolism beyond any language. This ritualistic form itself expressed a sacredness that is lacking in modern “social celebrations.” Also, they fail to mention the rich tradition of papal documents such as St. Pius V Quo Primum stating the reasons for the decree of the liturgical Latin Missal in 1570.

The way I see it: in the Tridentine Mass it is clear that along with the Eucharistic thanksgiving the priest is making a sacrificial offering to God and asking for His forgiveness and divine blessings; there is an intrinsic sense of sacredness in which the soul seeks its Divine Maker. The parts of the mass are clearly marked and depict a specific form in its words, the priest and altar positions; also, the rite is specific in the particular use of candles, Gregorian hymns, incense, communion rail and bells which serve to call and elevate all the senses to a heightened state of adoration into the eternal realm. The triple repetition of many prayers call for the triune God, Father, Son and Holy Ghost and help to bring back the memory and attention of the faithful.


In all of these acts that include the physical senses, the emotions, the will and the reason I find a complete participation of being, which purpose is the surrender in charity to God. It is a sense of recollection in which each person is apart from the world to find communion with God in union with the faithful -and from which love of God springs the love of neighbour. 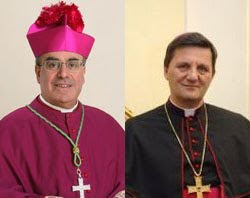 Although imbued with fresh ideas, Pro Tridentina (Malta) forges its whole outlook on traditional Catholic principles.
Like all the founders of similar lay movements, we are innovatory rather than revolutionary. The distinction has to be made clear. The revolutionary tries to pull down the present order of things to set up a new one, having nothing to do with the past. The innovatory loves tradition and wants to ruminate its past in order to renew the present order.
Our whole mission can be summarised by a "sentire cum Ecclesia", an empathy with the Church, currently under Pope Benedict XVI and our shepherds Archbishop Paul Cremona and Bishop Mario Grech.
Godwin Xuereb
President
Pro Tridentina (Malta)
on August 07, 2011 No comments:

Below: One of the first designs for the badge of Pro Tridentina (Malta) by Ivan Vassallo. 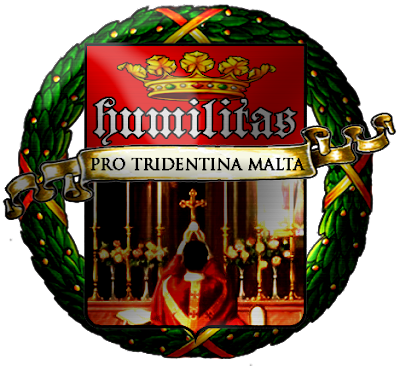 Today is the fourth anniversary of the official founding of Pro Tridentina (Malta). Prior to this event, there was no lay movement in favour of the Tridentine Mass in Malta or Gozo.

The developments that led to the founding can be traced back to November 2006. At the time, Abbé Armand de Malleray, from the FSSP, contacted a number of Maltese aiming to develop something concretely in this country. I am eternally greatful to Fr. de Malleray for the help he gave me and others at the time.

A first informal meeting was held on 21 April 2007 to determine the way forward. This was followed by another informal one on 20 July 2007 i.e. a week after the publication of the motu proprio Summorum Pontificum. Four years ago, the first official meeting was held.

Since then, we can say that the Tridentine Mass is becoming, albeit slowly, a reality in Malta. Pro Tridentina (Malta) was accepted as a member of the International Federation Una Voce (FIUV) in 2009.

Not everything has been positive. Some members have since left, the Catholic Church in Malta is still not favourably inclined to a wider, regular celebration of the Extraordinary Form. The media still presents a different picture than the reality is, namely that young people in Malta are among the most fervent followers of this form of the Mass.

But today, looking back at the past four years, one can be filled with hope that more progress will be achieved.