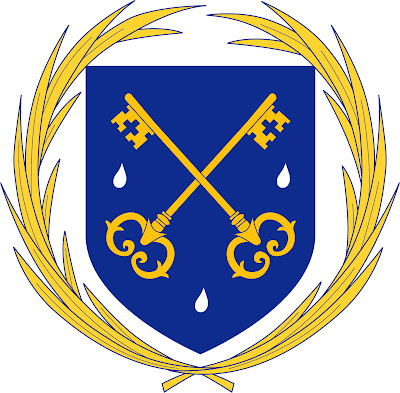 DENTON, Nebraska – January 22, 2010 – The Priestly Fraternity of Saint Peter is pleased to announce the Pontifical Consecration of its newly built chapel at Our Lady of Guadalupe Seminary on Wednesday, March 3rd at 10:00am (CST). Bishop Fabian Bruskewitz will celebrate the Pontifical Consecration and Mass according to the Extraordinary Form of the Roman Rite.
The five hour ceremony will be held in the presence of a very special guest from the Vatican, William Cardinal Levada, Prefect of the Congregation for the Doctrine of the Faith. The Priestly Fraternity of Saint Peter is delighted to have the presence of one of the highest ranking officials in the Catholic Church. Cardinal Levada's presence is connected with his position as President of the Pontifical Commission Ecclesia Dei established by Pope John Paul II and recently expanded by Pope Benedict XVI to facilitate the full incorporation into the life of the Church of communities and individuals attached to the Extraordinary Form.
Thanks to Thomas Gordon Smith, its architect, the seminary chapel reflects a contemporary rebirth in the rich tradition of classical Catholic architecture. Upon entering through its mahogany doors, the visitor will be immersed in the chapel's beauty and grandeur which include an elevated main altar, emphasized by a 31-foot marble canopy or "baldachino", the chapel's seven side altars and liturgical choir stalls which seat 92 seminarians and priests. These are some of the integral qualities of this chapel which, on March 3rd, will be full of the people for which it was made.
The Pontifical Consecration and Mass is open to all of the public. Any and all the faithful are cordially invited and are most welcome to attend this joyful event and enjoy refreshments afterward.
Due to the number of guests and limited space, rooms and television screens will be provided for those outside of the chapel who wish to participate.
The Pontifical Consecration and Mass will be televised live on the Eternal World Television Network (EWTN) at 11:00AM (EST). Watch the Pontifical Consecration and Mass Live Online!
www.ewtn.com/audiovideo
on January 24, 2010 No comments:

Papal liturgist sees need for 'reform of the reform' Msgr. Guido Marini, the master of ceremonies for papal ceremonies, called for a liturgical “reform of the reform” in a January 6 address to a conference organized by the Confraternity of Catholic Clergy. Msgr. Marini explained that this movement should “move one more step ahead in understanding the authentic spirit of the liturgy.”

The Vatican’s chief liturgist said that a renewal of the liturgy must reflect “the uninterrupted tradition of the Church,” incorporating the suggestions of Vatican II into that tradition. The conciliar reforms, he insisted, must be understood as being in continuity with the traditions of previous centuries. “The only disposition which permits us to attain the authentic spirit of the liturgy,” he said, “is to regard both the present and the past liturgy of the Church as one patrimony in continuous development.”

Msgr. Marini lamented that the need for renewal is evident in the widespread abuses of the liturgical. He observed that “it is not difficult to realize how far distant some modes of conduct are from the authentic spirit of the liturgy.” He added: “For this, we priests are largely responsible.”

Citing the works of then-Cardinal Ratzinger, from before his election as Benedict XVI, the Italian cleric emphasized that the form of the liturgy is established by the whole Church, and should not be altered arbitrarily by an individual priest-celebrant. He decried the “despotic behavior” of priests who disregard liturgical rules, and emphasized that the liturgy “is not made available to us in order to be subjected to our personal interpretation; rather, the liturgy is made available so as to be fully at the disposal of all, yesterday just as today and also tomorrow.”

What casual folly it is indeed, to claim for ourselves the right to change in a subjective way the holy signs which time has sifted, through which the Church speaks about herself, her identity and her faith!

Offering a few reflections on means of renewing the sense of the sacred in the liturgy, the Vatican official spoke first about the traditional ad orientem posture, “a traditiona which goes back to the origins of Christianity.” He argued that when priest and congregation alike face toward the east, it is “a characteristic expression of the authentic spirit of the liturgy.” He went on:

In our time, the expression “celebrating facing the people” has entered our common vocabulary. If one’s intention in using this expression is to describe the location of the priest, who, due to the fact that today he often finds himself facing the congregation because of the placement of the altar, in this case such an expression is acceptable. Yet such an expression would be categorically unacceptable the moment it comes to express a theological proposition. Theologically speaking, the holy Mass, as a matter of fact, is always addressed to God through Christ our Lord, and it would be a grievous error to imagine that the principal orientation of the sacrificial action is the community.
Msgr. Marini said that every aspect of the liturgy should be designed to encourage adoration. He pointed out that Pope Benedict has begun the practice of having the faithful, at papal liturgies, receive Communion kneeling, on the tongue, as a way to “render visible the proper attitude of adoration before the greatness of the mystery of the Eucharistic presence of our Lord.” While he wholeheartedly endorsed the call for active participation in the liturgy, the papal liturgist said that the participation of the laity would not be “truthfully active if it did not lead to adoration of the mystery of salvation in Christ Jesus, who for our sake died and is risen.”
on January 09, 2010 No comments: