Bishop Mario Grech and Amoris Laetitia - lest we forget 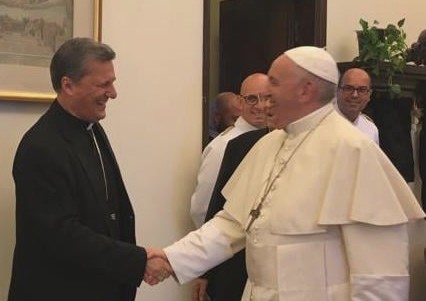 We are reproducing a comment from one of our readers. Any further information is appreciated. We consider the below as mere allegations for the time being.

Very sad. As a German residing in Malta, I remember that in 2015 this was reported in 'Malta Today' newspaper: •Priests pleaded with Rome and Cardinal Marx of the Bishops Conference in Europe not to see Grech appointed as Archbishop of Malta due to "reprehensible behaviour." •Grech failed to carry out the Vatican's order to defrock perverted priests who allegedly threatened to expose other cases of sexual abuse by priests. •He possessed the "grin of a Cheshire Cat" and was the "embodiment of a heady combination of spiritual authority and power with the lack of human accountability," in addition to a "manifest attachment to material wealth." •He was also accused in no uncertain term of being a "bully," creating a "bullying culture" in the local Church and being obsessed with of thriving in a "media spin culture." •Gozo continued, at least in 2015, to live at "home with his parents," and was accused of nepotism! Very sad news indeed. These are the corrupt Catholic Church leaders nowadays.

It had already been denied by Bishop Grech:

In a statement today, the Gozo Curia said that Bishop Mario Grech denies reports made in some international media, where it was alleged that he had threatened priests with suspension. The Curia said, “what is being stated by certain sections of the (international) media with reference to Bishop Mario Grech, namely that he `threatens priests with suspension (a divinis) for refusing communion to divorced/remarried,’ “is absolutely false.”

Archbishop Charles J. Scicluna and Bishop Mario Grech have prepared guidelines for priests, for the application of Chapter VIII of the Apostolic Exhortation of Pope Francis – Amoris Lætitia . This chapter is an invitation for mercy and for pastoral discernment. In a letter read on Sunday in the churches of Gozo and Malta, the bishops explained that “this message is also relevant to the couples and families who find themselves in complex situations, especially those involving separated or divorced persons who have entered a new union. Although they may have “lost” their first marriage, some of these persons have not “lost” their hope in Jesus. Some of these earnestly desire to live in harmony with God and with the Church, so much so, that they are asking us what they can do in order to be able to celebrate the sacraments of Reconciliation and the Eucharist.”