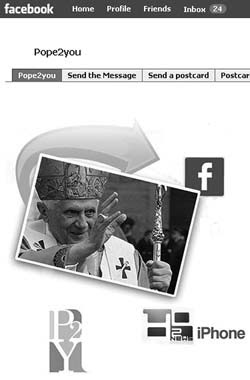 The Pope today warned online Catholic users to be respectful when using the internet to promote religion.

In his annual message for the church's World Day of Social Communications, the Pope called for the faithful to adopt a "Christian style presence" online that is responsible, honest and discreet.
"We must be aware that the truth which we long to share does not derive its worth from its 'popularity' or from the amount of attention it receives," he wrote. "The proclamation of the Gospel requires a communication which is at once respectful and sensitive."

The Pope did not name anyone, but the head of the Vatican's social communications office, Archbishop Claudio Celli, said it would not be incorrect to direct his exhortation to some conservative Catholic blogs, YouTube channels and sites which, with some vehemence, criticise bishops, public officials and policies they consider not Catholic enough.

"The risk is there, there's no doubt," Archbishop Celli said. He noted that the Pontifical Council for Social Communications was working on a set of guidelines with recommendations for appropriate style and behaviour for Catholics online.

"I don't love such things, but I think we can define some points of reference for behaviour," he said.

In his message, the Pope echoed many of the same themes he has voiced in years past about the benefits and dangers of the digital age, saying social networks are a wonderful way to build relationships and community. But he warned against replacing real friendships with virtual ones and the temptation to create artificial public profiles rather than authentic ones.

"There exists a Christian way of communication which is honest and open, responsible and respectful of others," he wrote. "To proclaim the Gospel through the new media means not only to insert expressly religious content into different media platforms, but also to witness consistently, in one's own digital profile and in the way one communicates choices, preference and judgments that are fully consistent with the Gospel."

The 83-year-old pope is no techno wizard: He writes longhand and has admitted to a certain lack of internet knowledge within the Vatican.

But under him the Holy See has greatly increased its presence online: It has a dedicated YouTube channel, and its Pope2You.net portal gives news on the pontiff's trips and speeches and features iPhone and Facebook applications that allow users to send postcards with photos of the pope and excerpts from his messages to their friends.
on January 24, 2011