Quotes to reflect upon (24) 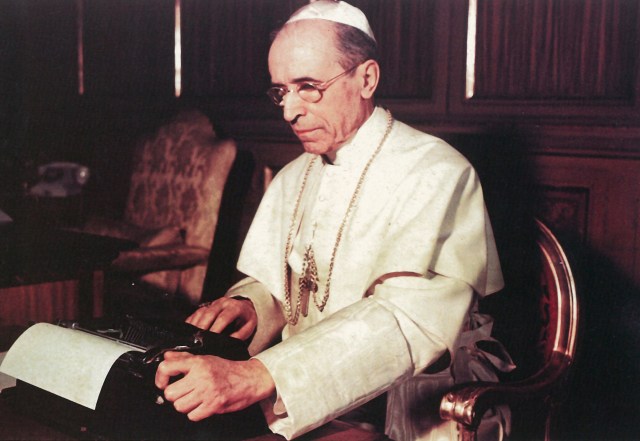 From the encyclical Mediator Dei of Pope Pius XII (1947).

23. The worship rendered by the Church to God must be, in its entirety, interior as well as exterior. It is exterior because the nature of man as a composite of body and soul requires it to be so. Likewise, because divine Providence has disposed that “while we recognize God visibly, we may be drawn by Him to love of things unseen.”[26 – Roman Missal, Preface for Christmas.] Every impulse of the human heart, besides, expresses itself naturally through the senses; and the worship of God, being the concern not merely of individuals but of the whole community of mankind, must therefore be social as well. This obviously it cannot be unless religious activity is also organized and manifested outwardly. Exterior worship, finally, reveals and emphasizes the unity of the mystical Body, feeds new fuel to its holy zeal, fortifies its energy, intensifies its action day by day: “for although the ceremonies themselves can claim no perfection or sanctity in their won right, they are, nevertheless, the outward acts of religion, designed to rouse the heart, like signals of a sort, to veneration of the sacred realities, and to raise the mind to meditation on the supernatural. They serve to foster piety, to kindle the flame of charity, to increase our faith and deepen our devotion. They provide instruction for simple folk, decoration for divine worship, continuity of religious practice. They make it possible to tell genuine Christians from their false or heretical counterparts.”[27]

24. But the chief element of divine worship must be interior. For we must always live in Christ and give ourselves to Him completely, so that in Him, with Him and through Him the heavenly Father may be duly glorified. The sacred liturgy requires, however, that both of these elements be intimately linked with each another. This recommendation the liturgy itself is careful to repeat, as often as it prescribes an exterior act of worship. Thus we are urged, when there is question of fasting, for example, “to give interior effect to our outward observance.”[28 – Roman Missal, Secret for Thursday after the Second Sunday of Lent.] Otherwise religion clearly amounts to mere formalism, without meaning and without content.  You recall, Venerable Brethren, how the divine Master expels from the sacred temple, as unworthily to worship there, people who pretend to honor God with nothing but neat and well-turned phrases, like actors in a theater, and think themselves perfectly capable of working out their eternal salvation without plucking their inveterate vices from their hearts.[29]  It is, therefore, the keen desire of the Church that all of the faithful kneel at the feet of the Redeemer to tell Him how much they venerate and love Him. She wants them present in crowds – like the children whose joyous cries accompanied His entry into Jerusalem – to sing their hymns and chant their song of praise and thanksgiving to Him who is King of Kings and Source of every blessing. She would have them move their lips in prayer, sometimes in petition, sometimes in joy and gratitude, and in this way experience His merciful aid and power like the apostles at the lakeside of Tiberias, or abandon themselves totally, like Peter on Mount Tabor, to mystic union with the eternal God in contemplation.

25. It is an error, consequently, and a mistake to think of the sacred liturgy as merely the outward or visible part of divine worship or as an ornamental ceremonial. No less erroneous is the notion that it consists solely in a list of laws and prescriptions according to which the ecclesiastical hierarchy orders the sacred rites to be performed.

26. It should be clear to all, then, that God cannot be honoured worthily unless the mind and heart turn to Him in quest of the perfect life, and that the worship rendered to God by the Church in union with her divine Head is the most efficacious means of achieving sanctity.

The FIUV is a lay movement, and its principal aims are to ensure that the Missale Romanum (1962 edition) is maintained in the Church as one of the forms of liturgical celebration, and to safeguard and promote the use of Latin, Gregorian chant and sacred polyphony. A General Assembly is convened every two years in Rome and elections are held for the Council and Presidency. The Federation is recognized by the Holy See, its views are received with courtesy and respect by the relevant Roman Congregations, and its representatives are received by them in the same manner.